Old Forge is a hamlet (and census-designated place) on New York State Route 28 in the town of Webb in Herkimer County, New York, United States. The population was 756 at the 2010 census. Old Forge was formerly a village but dissolved its incorporation in 1936, but it remains the principal community in the region. As one of the western gateway communities of the Adirondack Park, Old Forge forms an extensive business district, primarily directed at tourism especially during the summer months. The local school is the Town of Webb UFSD, a K–12 institution with the Eskimo as their mascot. Old Forge often records the lowest winter temperatures in New York. On February 17, 1979, the record low temperature for New York was set in Old Forge at −52 °F (−47 °C). 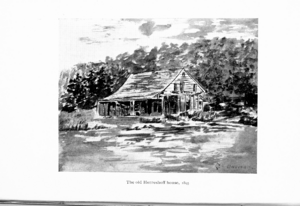 In 1798 the 210,000 acres (85,000 ha) area including Old Forge came into possession of the Brown family of Rhode Island, through a transaction involving Aaron Burr. John Francis Brown built a 25 miles (40 km) wagon trail from Remsen and attempted to settle about 20 families in the area. The land was unsuitable for farming, these attempts failed, and the area was abandoned by 1803.

In 1811 John Brown's son-in-law Charles Frederick Herreshoff moved to the area and attempted to raise sheep, opened an iron mine, and built the first forge. These ventures again failed, and Herreshoff committed suicide in 1819. A few settlers remained, including Nat Foster, said to be the inspiration for James Fenimore Cooper's character of "Natty Bumppo."

The railroad was built in 1888, originally horse-drawn with wooden rails. Before the railroad was completed the plans were changed to use steam power rather than horses. A station was constructed at nearby Thendara.

Old Forge was incorporated as a village in October 1903. The incorporation would be short lived as residents voted to dissolve the village on July 11, 1933, 117 to 96, due to the high cost of government operations. A second vote for the final dissolution plan took place on October 21, 1933, also in favor. The New York Supreme Court, 5th Judicial District, would hand down a court order three months later suspending the dissolution process due to a lawsuit claiming the special election in October being deemed illegal based on taxpayer and distribution factors within the plan. After an appeal to the New York Supreme Court, Appellate Division, Fourth Department, the Village of Old Forge was officially able to dissolve on March 31, 1936.

Enchanted Forest Water Safari is New York's largest water theme park. It has 50 rides and attractions, including 32 water slides, as well as shops, restaurants, photographers, and a circus show.

The Goodsell House was listed on the National Register of Historic Places in 2006.

Many peaks can be seen from the village, including McCauley Mountain, home of McCauley Mountain Ski Resort. With a 633-foot vertical drop, McCauley also boasts 21 ski trails of 3,000-5,000 ft, one double chairlift, two T-bar and two rope tows. As Old Forge is frequently affected by lake effect snow, and with 65% snowmaking capabilities, McCauley averages a base of 120+ inches and 105 days of skiing.

Snowfall totals also contribute to the areas other primary winter draw, snowmobiling. Dubbed the "Snowmobile Capital of the East", Old Forge controls primary access to more than 500 miles of groomed trails. These trails, combined with operative sidewalk and limited street use, often ridable frozen lakes (especially the adjoining Fulton Chain of Lakes, and connection to other large trail systems, offer substantial area for the sport.

The Old Forge Airport is a small grass field airport that is just one mile north of the actual town. There are two runways. The airport is unattended and is privately owned. Permission must be obtained before landing. The Old Forge Dam is a small dam separating the Fulton Chain of Lakes and the Moose River.

The primary highway passing through Old Forge is New York State Route 28. Old Forge lies along the Moose River at the western end of the Fulton Chain of Lakes.

There were 371 households, out of which 19.4% had children under the age of 18 living with them, 46.1% were married couples living together, 5.9% had a female householder with no husband present, and 43.9% were non-families. 38.0% of all households were made up of individuals, and 15.4% had someone living alone who was 65 years of age or older. The average household size was 2.04 and the average family size was 2.67.

Old Forge Airport, a private use airport is one mile north of Old Forge.

Old Forge has been home, or at least the summer residence, to many notable people, including former presidents, Olympic athletes, World Cup skiers, and a pioneering female physician.

All content from Kiddle encyclopedia articles (including the article images and facts) can be freely used under Attribution-ShareAlike license, unless stated otherwise. Cite this article:
Old Forge, New York Facts for Kids. Kiddle Encyclopedia.