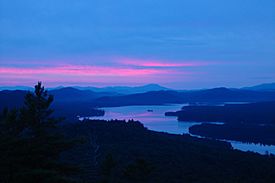 The Fulton Chain of Lakes is a string of eight lakes located in the Adirondack Park in upstate New York, United States. The chain is the dammed-up Moose River, and the dam which creates the chain holds back nearly 6.8 billion US gallons (26,000,000 m3) of water. The lakes are located in Herkimer and Hamilton Counties. Inlet, Old Forge, and Eagle Bay are towns on them. The chain begins near Old Forge and ends before it reaches Raquette Lake. The lakes are named for Robert Fulton, inventor of the steamboat, who proposed connecting the lakes to create an Adirondack canal. They are suitable for pontoon boats (the most popular type in the area), kayaks, and motorboats. The chain is part of the 740-mile (1,190 km) Northern Forest Canoe Trail, which begins on First Lake and ends in Fort Kent, Maine.

The lakes in the chain have been given ordinal designations: First Lake, Second Lake, Third Lake, Fourth Lake, Fifth Lake, Sixth Lake, Seventh Lake, and Eighth Lake. The chain begins with a small lake not counted in the series called Old Forge Pond. In reality, First, Second and Third Lake are one long lake separated by narrow straits. At the east end of Fourth Lake, by Inlet in Hamilton County, a stream, or channel, allows access to the small Fifth Lake. A portage is necessary to arrive at Sixth Lake, which is also connected by a narrow strait to Seventh Lake. Another portage is required to gain access to Eighth Lake.

Beyond Eighth Lake is Raquette Lake and another string of lakes in Indian Lake, New York.

The lakes were expanded from 2,762 acres (11 km2) to 3,481 acres (14 km2) in 1798 when the Moose River was dammed at Old Forge. The present dam at Old Forge holds back 6.8 billion US gallons (26,000,000 m3) of water. This reservoir is managed by the HR-BR Regulating District. In the late 1800s, the State Water Power Commissioner made an agreement with Fulton Chain cottage owners and recreational users to maintain the water level during the summer season, an agreement still in effect.

Prior to World War II, the town of Inlet boasted fourteen Adirondack hotels. The Woods Inn is now the only historic hotel remaining open year round. Boating is a popular activity in the Fulton Chain of Lakes because any aspects of the lakes are accessible by water. For example, the restaurants of The Woods Inn, Great Pines (Formerly Northwoods Inn), Daikers, and the Screamen Eagle are all accessible by boat, you can also get to Inlet and Old Forge by boat. A very popular type of boat in the Adirondacks is the pontoon boat because many people enjoy relaxing on the lakes. Also fishing boats because of the vast numbers of types of fish and areas of the lakes to be able to fish. The lakes sport decent populations of gamefish including northern pike, lake trout, rainbow trout, brook trout, landlocked (Atlantic) salmon, largemouth bass, smallmouth bass, yellow perch, brown bullhead, tiger muskie and various panfish. Tubing, skiing, knee boarding, and wake boarding are all common water recreational activities that are seen while on the Fulton Chain of Lakes.

The Fulton Chain is the start of the Adirondack Canoe Classic, a three-day, 90-mile (140 km) canoe race. This canoe race is for anyone from beginners to experts, it is a way to get the community together and to get everyone involved with something. Many kids (usually older kids) will go with their parents and form a team. Many people train very hard for this 90 mile race, however some teams just go out there for the comradery of it all and just to have fun with friends. However, it is a rigorous course and includes three days of physical activity and hard work for participants.

Hiking is a very popular activity in the Adirondack Park because of the vast numbers and varieties of hikes available. Some of the varieties of hikes include anything from the High Peaks to the relatively flat hikes of Sis and Bub. Bald Mountain is one of the most popular mountains to hike not only by the Fulton Chain of Lakes but also in the Adirondacks as a whole due to the amazing views of the entire chain. At the top of this mountain there is the Rondaxe Fire Tower that has been restored to allow hikers to climb to the top of it in order to enhance the incredible views of the Fulton Chain of Lakes. Sis and Bub lakes is a relatively flat hike, it has some inclination however it is nothing too drastic. This hike is good for families with younger children because it is not very rigorous or challenging. Another hike is the Sis, Bub, and Moss Lake trail, it is a full loop that connects Sis and Bub lakes to Moss Lake, this hike is very suitable for families and is primarily flat.

Inlet is located at the “head of Fourth Lake” and this is where it gets its name from because it is near the inlet of the fourth of the eight lakes. Inlet is a small town that includes Kalil’s Grocery Store, a post office, a realtor’s office, restaurants, other stores and a baseball field. Many of the businesses in the town are family owned and run.

Eagle Bay is a small town that is also located on Fourth lake and includes a neighborhood full of cabins. The town includes restaurants, a laundromat, and a fire station. The neighborhood of Eagle Bay is a small, quaint place where the homes are on mainly square plots set back in the woods, however some of them are waterfront. There are two community beaches that are accessible to homeowners of the neighborhood, as well as boat slips that are available for purchase with the property.

Old Forge is the biggest of the three towns adjacent to the lakes and is also located at the beginning of the Fulton Chain of Lakes, by the Old Forge Pond. In Old Forge there are grocery stores, restaurants, souvenir stores, realtors offices, and a fire station. Old Forge is a well known town all throughout the Adirondacks and especially around the Fulton Chain of Lakes. There is also a motel located right above the Old Forge Pond. A well-known water park called Enchanted Forest Water Safari is a very popular tourist attraction in Old Forge and is the largest water park in New York state.

All content from Kiddle encyclopedia articles (including the article images and facts) can be freely used under Attribution-ShareAlike license, unless stated otherwise. Cite this article:
Fulton Chain of Lakes Facts for Kids. Kiddle Encyclopedia.