The park was opened as The Enchanted Forest of the Adirondacks in 1956 by A. Richard Cohen, a hardware store owner and commissioner for the Adirondack Authority in charge of the development of ski centres on Whiteface and Gore mountains. When opened, it had 35 employees and encompassed 35 acres (140,000 m2) of swampland. Admission was $1 for adults and 25¢ for children. Over time, the park expanded in size to its present 60 acres (240,000 m2).

The design for the park, incorporating a large circus tent and a series of houses with themes from children's nursery rhymes and fairy tales, was based upon research by Cohen's daughter and wife, whom he sent to several amusement parks across the country to study how they worked. Concept watercolor paintings for the park were done by Russell Patterson, who also worked on the designs of the several individual fairy tale houses in the park.

The only mechanical ride at the park in 1956 was a train, the Enchanted Forest Express, that traveled around the park. However, this changed during the 1960s when more rides were introduced to the park.

In 1977, Cohen sold the park to the Noonan family. In 1988, the park's name was changed to Enchanted Forest Water Safari, after a major expansion that added numerous waterslides to the park. (two 350-foot (110 m) waterslides) that had been added in 1984. 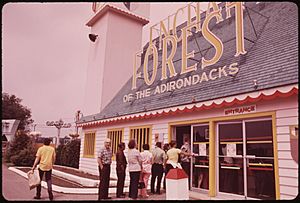 Entrance to Enchanted Forest in 1973

In addition to the water and amusement rides, the park also has two daily circus shows (at noon and at 4 pm), a petting zoo, a small museum dedicated to the park, and multiple video game arcades and side show games throughout the park. The park has a no smoking policy, but areas are designated for those who wish to smoke. Dogs on leashes are allowed in the park.

The park also has an area in the back dedicated to circus performances such as acrobatics and animal shows.

All content from Kiddle encyclopedia articles (including the article images and facts) can be freely used under Attribution-ShareAlike license, unless stated otherwise. Cite this article:
Enchanted Forest Water Safari Facts for Kids. Kiddle Encyclopedia.