The Northern Forest Canoe Trail (NFCT) is a 740-mile (1,190 km) marked canoeing trail in the northeastern United States and Canada, extending from Old Forge in the Adirondacks of New York to Fort Kent, Maine. Along the way, the trail also passes through the states and provinces of Vermont, Quebec, and New Hampshire. The trail was opened on June 3, 2006. 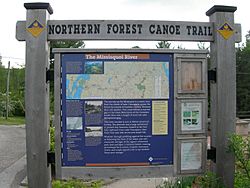 The trail has been likened to a water version of the Appalachian Trail, and there are many similarities: both are long-distance trails that most people will use for day trips or short overnight trips. Many of those who paddle the entire trail will do so in sections. Unlike the AT, the NFCT obtains access for campsites and portages through landowner permission rather than through land protection. Also, many sections of the trail require a high level of skill to complete.

The trail covers 58 lakes and ponds, 22 rivers and streams, and 63 "carries" (portages) totaling 53 miles (85 km). On some sections of the trail, portage trails, campsites, and access areas are marked with Northern Forest Canoe Trail medallions, a yellow diamond with blue lettering.

The American Canoe Association has named the NFCT an ACA-Recommended Water Trail.

As of 2016[update], 95 people have "through-paddled" the trail — traveling the length of the trail in one expedition. In addition, six other "section-paddlers" have completed it in multiple trips.

Nicole Grohoski and Thomas Perkins of Ellsworth, Maine were the first to officially through-paddle the trail in 2006, traveling the length of the trail in about 45 days. Donnie Mullen paddled the trail in 2000 before its official opening, taking about 55 days but doing so without the signs and maps that were available in 2015. The fastest thru-paddle was completed in 2012 Elspeth Ronnander, Erik Peih and Emily Johnson. the trip took them 21 days, 3 hours and 45 minutes.

"Paddling the Northern Forest Canoe Trail" by Sam Brakeley - a narrative of a 2009 thru-paddle in journal form.

All content from Kiddle encyclopedia articles (including the article images and facts) can be freely used under Attribution-ShareAlike license, unless stated otherwise. Cite this article:
Northern Forest Canoe Trail Facts for Kids. Kiddle Encyclopedia.