The Missisquoi River is a transboundary river of the east shore of Lake Champlain (via Missisquoi Bay), approximately 80 miles (130 km) long, in northern Vermont in the United States and southern Quebec in Canada.

It drains a rural area of the northern Green Mountains along the Canada–US border northeast of Lake Champlain, and an area of Quebec's Eastern Townships. The South Branch rises in Vermont and runs generally from southeast to northwest; the North Branch rises in Lake d'Argent in Eastman, Quebec, and runs from north to south. The North Branch and the South Branch join at Highwater, Quebec, just downriver from North Troy, Vermont. The river then runs in Quebec for approximately 15 miles (24 km), re-entering Vermont at Richford and thence to Lake Champlain's Missisquoi Bay. 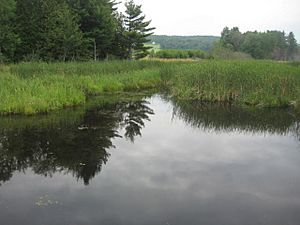 According to US Natural Resources Conservation Service, Missisquoi Soil – Missisquoi is derived from the Abenaki word masipskoik, which means "where there is flint" or "where flint is". The name originates from an Abenaki chert quarry located near Missisquoi Bay on Lake Champlain.

According to the "Commission de toponymie du Québec" (Quebec board of place names), the term "missisquoi" in Abenaki means "multitudes of water birds", which takes on this river all its meaning. The traditional indigenous variant of this toponym is "Wazowategok", meaning "to the river that turns around".

The toponym "Rivière Missisquoi" was formalized on December 5, 1968 at the Commission de toponymie du Québec.

The Missisquoi River rises in western Orleans County, Vermont, northwest of Lowell, Vermont, at an altitude of 247 metres (810 ft). This source is located next to route 58 and next to Belvidere Mountain. This source proves the be the continuity of the Burgess Branch (coming from the southwest).

It flows west through northern Franklin County approximately 10 miles (16 km) south of the Canada–US border, past the small communities of Richford, East Berkshire, Enosburg Falls, and Sheldon Springs. On the west side of Interstate 89 in northwestern Franklin County, it turns to the north, passing through Missisquoi National Wildlife Refuge in its lower 5 miles (8.0 km) before entering the south end of Missisquoi Bay, an arm of Lake Champlain that straddles the Canada-Vermont border. In the last segment of 5.6 kilometres (3.5 mi) (ie from Dead Creek) in Swanton, the Missisquoi River crosses a large area of marsh located on a peninsula (stretching over 4.2 kilometres (2.6 mi)) westwards and having a width of 7.2 kilometres (4.5 mi)).

Named tributaries in Vermont are: Taft Brook in Westfield, Beetle Brook in Troy, Jay Brook in Jay, Stanhope Brook in Richford, the Trout River in Montgomery, Tyler Branch in Enosburg, Black Creek in Sheldon and Fairfield, and Hungerford Brook in Swanton and Highgate.

The Abenaki people used the river as a canoe route between the Lake Champlain drainage and the Saint-François River drainage. The river supports canoe traffic from Lake Champlain to Mansonville, Quebec, where there is a falls. From there, an ancient portage (carrying place) runs 6 miles (9.7 km) to Perkins Landing on Lake Memphremagog. Abenaki groups met seasonally on the bluffs at Eagle Point in Newport, Vermont, to catch and dry whitefish.

The Missisquoi Valley was among the first areas of Southern Quebec's Eastern Townships to be settled by Loyalist refugees, who came upriver from camps on Missisquoi Bay.

A Study Committee composed of local appointees and partner organizations has been evaluating the Wild and Scenic Designation of the upper Missisquoi and Trout rivers. The group's mission is to facilitate the transfer of information among the ten communities through which the rivers flow - Berkshire, Town of Enosburgh, Village of Enosburg Falls, Jay, Lowell, Montgomery, Village of North Troy, Richford, Westfield, and the Town of Troy, and evaluate the potential benefits of the Wild & Scenic designation. At the end of the study in 2012, the committee is scheduled to provide an assessment as to whether the rivers fit designation criteria and whether designation is supported, and make recommendations of voluntary strategies for protection of the rivers' resources.

As a result of the National Park Service and Study Committee recommendation, 46.1 miles (74.2 km) of the Missisquoi River and Trout River were added to the National Wild and Scenic River System on December 19, 2014.

The Valley Bridge spans the Missisquoi River on a north-west/south-east axis. This bridge is located on the Canada-US border, between the two customs posts.

The northwest part of this bridge is located in the town of Sutton, near the hamlet of Glen Sutton, in Quebec. The other end of the bridge is located in the municipality of Richford, in the state of Vermont in the United States, near the hamlet of East Richford. This bridge serves sector residents and vacationers transiting between Canada and the United States. This triangular metal beam bridge has two spans: one of 16 m and the other of 46.5 meters.

According to a souvenir plaque affixed at each end of the bridge, the manufacturer of the metal superstructure of the Vallée bridge is the American company Pittsburg Des Moines Steel Co. The substructure was built by Cenedella & Compagny, from Milford to Massachusetts. Construction contracts had been awarded in 1929. This bridge has been listed since 1990 in the National Register of Historic Places in the United States. This metal bridge replaces the old concrete bridge destroyed by the November 1927 flood.

In 2016, about 60% of male smallmouth bass bore eggs (androgyny). Pollution from farmland runoff, containing the weedkiller atrazine is a possible suspect.

All content from Kiddle encyclopedia articles (including the article images and facts) can be freely used under Attribution-ShareAlike license, unless stated otherwise. Cite this article:
Missisquoi River Facts for Kids. Kiddle Encyclopedia.