Richford is a town in Franklin County, Vermont, United States, located along the Canada–United States border. The population was 2,308 at the 2010 census.

Richford is the birthplace of R. G. LeTourneau, an industrialist who founded LeTourneau University in Longview, Texas.

Richford is the eastern terminus of the Missisquoi Valley Rail-Trail.

Richford is located in the northeast corner of Franklin County, bordered to the north by the Brome-Missisquoi Regional County Municipality in the Montérégie region of Quebec in Canada. Orleans County, Vermont, is to the east. Richford, the primary community, is in the northwest part of the town along the Missisquoi River. Vermont Route 105 passes through the center of town, leading east across the Green Mountains to North Troy and southwest to Enosburg Falls. Vermont Route 139 leads north from the center of Richford 1.5 miles (2.4 km) to the international border. 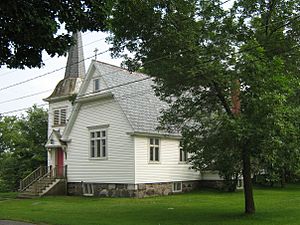 There were 899 households, out of which 32.5% had children under the age of 18 living with them, 51.7% were married couples living together, 11.3% had a female householder with no husband present, and 31.8% were non-families. 25.7% of all households were made up of individuals, and 12.3% had someone living alone who was 65 years of age or older. The average household size was 2.53 and the average family size was 2.98. 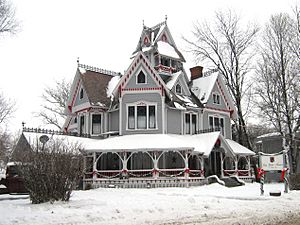 Several buildings and structures are listed on the National Register of Historic Places, including St. Ann's Episcopal Church, the Sheldon Boright House, the F.W. Wheeler House, the Richford Primary School, the Missisquoi River Bridge, and the Downtown Richford Historic District.

All content from Kiddle encyclopedia articles (including the article images and facts) can be freely used under Attribution-ShareAlike license, unless stated otherwise. Cite this article:
Richford, Vermont Facts for Kids. Kiddle Encyclopedia.