The Androscoggin River is a river in the U.S. states of Maine and New Hampshire, in northern New England. It is 178 miles (286 km) long and joins the Kennebec River at Merrymeeting Bay in Maine before its water empties into the Gulf of Maine on the Atlantic Ocean. Its drainage basin is 3,530 square miles (9,100 km2) in area. The name "Androscoggin" comes from the Eastern Abenaki term /aləssíkɑntəkw/ or /alsíkɑntəkw/, meaning "river of cliff rock shelters" (literally "thus-deep-dwelling-river"); or perhaps from Penobscot /aləsstkɑtəkʷ/, meaning "river of rock shelters". The Anglicization of the Abenaki term is likely an analogical contamination with the colonial governor Edmund Andros. 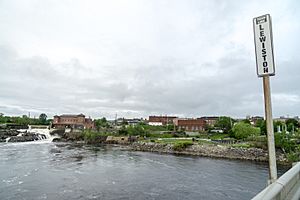 The Androscoggin flowing past Lewiston, Maine

The Androscoggin begins in Errol, New Hampshire, where the Magalloway River joins the outlet of Umbagog Lake. The river flows generally south but with numerous bends past the towns of Errol and Milan and the city of Berlin before turning east at the town of Gorham, New Hampshire, to cut across the northern end of the White Mountains and enter Maine. Continuing east, the river passes the towns of Bethel, Rumford, and Dixfield before turning south at the town of Livermore Falls and leaving the mountains behind. The river passes through the twin cities of Lewiston and Auburn, turns southeast, passes the community of Lisbon Falls and reaches tidewater just below the final falls in the town of Brunswick. Merrymeeting Bay is a 10-mile-long (16 km) freshwater estuary where the Androscoggin meets the Kennebec River nearly 20 miles (32 km) inland from the Atlantic Ocean.

The Androscoggin was once heavily polluted by a variety of textile mills, paper mills, and other industries located along its banks, and helped inspire the Clean Water Act. The river has benefited greatly from environmental work and the departure of certain types of industry from the region. As a result, the amount of contaminated wastewater being released into the river has greatly decreased. However, several mills still release chemical waste into the river, albeit in much smaller amounts. From the 1940s through the 2000s, the Androscoggin was so polluted that some environmental groups listed it as one of the 20 most polluted rivers in the United States. The pollution became so severe that until very recently, one 14-mile (23 km) stretch required oxygen bubblers to prevent fish from suffocating. As of May 2007, environmental groups had a lawsuit pending, in an attempt to force the paper mills located along the river to clean their waste streams. Most companies have agreed to slow the amount of wastewater discharge, but only a few have completely stopped, with other companies citing cost as a prime factor for continued pollution.

On April 15, 2020, a large explosion occurred at the Verso Paper Mill, located on the river. It is unknown what impacts, either negative or positive, the explosion and the mill's indefinite closing will have on water quality.

The U.S. Geological Survey (USGS) maintains four river flow gauges on the Androscoggin River. All four are below one or more dams.

The Androscoggin River is a popular fishing destination for anglers. The upper section of the river offers good fly fishing for brook, rainbow and brown trout. Landlocked salmon can also be caught in the far northern portions of the river near Errol, New Hampshire. As the river progresses south and east of the White Mountains, the river widens some and the water quality becomes more acidic. As a result of these changes, the trout and salmon fisheries vanish almost entirely in the central and lower portions of the river. However, these sections often contain trophy smallmouth bass fisheries. Northern pike also inhabit the lower sections, with quality specimens being reported for this species as well. Other species found in the lower portions include redbreast sunfish, yellow perch and white suckers.

Paddling near the Free-Black Bridge in Brunswick, Maine

The Androscoggin River Watershed Council, a local nonprofit, has been working to establish a water trail along the entire length of the river. The trail will provide improved portages and access sites for paddling, fishing, and boating. There are currently over 40 mapped public access sites to the river.

The Androscoggin Riverlands State Park in Maine is a popular area for paddling. It consists of 12 miles (19 km) along the western shoreline of the river just east of Turner. 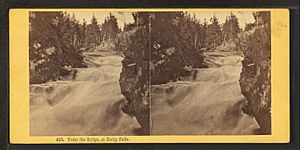 Stereoscopic image "Under the bridge at Berlin Falls", by the Bierstadt Brothers

The ancient name for the river was Pescedona, which is Abenaki for "a branch".

The average Androscoggin drop of eight feet per mile made it an excellent source of water power encouraging development of the cities of Berlin, New Hampshire, and Lewiston and Auburn, Maine, and the Maine towns of Brunswick, Topsham, Lisbon Falls, Livermore Falls, Chisholm, Mexico, Rumford and Bethel.

Listed from source to mouth of Androscoggin, with location of tributary's mouth:

All content from Kiddle encyclopedia articles (including the article images and facts) can be freely used under Attribution-ShareAlike license, unless stated otherwise. Cite this article:
Androscoggin River Facts for Kids. Kiddle Encyclopedia.