Rumford is a town in Oxford County, Maine, United States. The population was 5,841 at the 2010 census. Rumford is home to both ND Paper Inc's Rumford Mill and the Black Mountain of Maine ski resort. 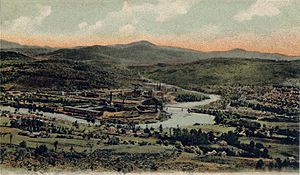 Bird's-eye view of Rumford Falls in 1905

Originally called New Pennacook Plantation, the township was granted in 1779 to Timothy Walker, Jr. and associates of Concord, New Hampshire. Both Pennacook and Rumford are former names of Concord, from which many early settlers arrived. The first pioneers, however, were Jonathan Keyes and his son Francis in 1782 from Shrewsbury, Massachusetts. Incorporated in 1800, the town would later annex land from Peru and Franklin Plantation.

Located in the foothills of the White Mountains, Rumford is the site of Pennacook Falls, called by historian George J. Varney "the grandest cataract in New England," where the Androscoggin River drops 177 feet (54 m) over solid granite. Bands of St. Francis Indians once hunted and fished here, where salmon spawn in the 13-acre (5.3 ha) pool below Upper Falls, a barrier that fish cannot pass. The river is home to a large population of the finless brown variety of trout. Indians also came here to trade furs brought from the lakes region. Sawmills and gristmills were built to harness water power from the falls, although Rumford would remain primarily agricultural during its first 100 years.

In 1882, industrialist Hugh J. Chisholm recognized the falls' potential for the manufacture of paper. Chisholm directed construction of the Portland and Rumford Falls Railway connecting Rumford to the national rail network in 1892. The first paper mill began operation in 1893, drawing an infusion of people and money into the sleepy community of about 200 residents. Oxford Paper Company, owned by Chisholm, would dominate Rumford's riverfront and economy.

Much of the mill town was built in the spurt of prosperity at the turn-of-the-century, and Rumford retains significant Victorian and Edwardian architecture. Most notable is Strathglass Park, perhaps the finest company housing in the nation. Wishing to avoid the stacked slums endemic at Lowell and Lawrence, Massachusetts, Hugh Chisholm commissioned Cass Gilbert in 1900 to plan a 30-acre (12 ha) site in his company town, instructing the prominent architect that "We will build of brick and stone and slate, and we will provide not merely for a house, but for comfort, elegance and social gratification."

Named after the seat of Clan Chisholm at Strathglass Carries, Scotland, Gilbert in 1901 produced 5 designs for 51 duplexes, each with subtle differences. The same year, Chisholm founded The Rumford Realty Company to build the oval-shaped development, its entrance marked by an imposing granite gateway. With attractive lawns and broad, tree-lined streets, all maintenance was provided by the Oxford Paper Company. Even valet service was included. Tenants paid a rent of $9.00 per month, plus $1.00 per month to the Rumford Falls Power Company, also belonging to Chisholm. But in 1948, the incomplete development was no longer economically viable, and the houses were sold for between $3,400 and $3,900 per duplex.

In June 1941, the cabin cruiser "The Don" sunk off of Harpswell, Maine with 34 residents of Rumford on board. It remains the largest loss of life in the town's history. The cause of the wreck was never determined but multiple theories abound as to the vessel's demise including it being sunk by a U-boat or an insurance scheme. The only communication from the boat was shortly after it left port when a radio distress call came out to nearby ships with a voice saying "If I don't get off this boat somebody's gonna get thumped."

Recognized for unique architectural and social merit, in 1974 Strathglass Park was added to the National Register of Historic Places as a historic district. Today, much of the history of Rumford is preserved by the Rumford Historical Society. Founded in 1961, under the sponsorship of prominent residents Louis Thibodeau, Minerva Anderson and Jonathan Mackenzie, the society pledges to preserve the rich history of the western mill town and encourage community involvement among all.

This climatic region has large seasonal temperature differences, with warm to hot (and often humid) summers and cold (sometimes severely cold) winters. According to the Köppen Climate Classification system, Rumford has a humid continental climate, abbreviated "Dfb" on climate maps.

All content from Kiddle encyclopedia articles (including the article images and facts) can be freely used under Attribution-ShareAlike license, unless stated otherwise. Cite this article:
Rumford, Maine Facts for Kids. Kiddle Encyclopedia.