Kids Encyclopedia Facts
This page is about the town. For the census-designated place comprising the town center only, see Dixfield (CDP), Maine.

Dixfield is a town in Oxford County, Maine, United States. The population was 2,550 at the 2010 census. The town motto of Dixfield is "The Only One", because it is the only town in the world to claim that name. Dr. Elijah Dix, a substantial landowner in the area, bought the town (and Dixmont) which bears his name. 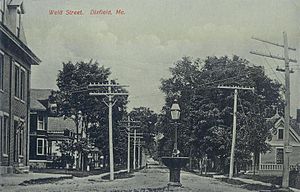 The Massachusetts General Court granted the township in 1789 to Colonel Jonathan Holman of Sutton, Massachusetts (now Millbury), an American Revolutionary War veteran, together with 25 others. In 1795, the first permanent settlers arrived with their families—John Marble, Gardner Brown, Amos Trask, Levi Newton, David Torrey and John Gould. It was called Holmantown Plantation until part of it was incorporated on June 21, 1803 as Dixfield, the 147th town in Maine (the remainder of the plantation would be incorporated in 1818 as Mexico). Dr. Elijah Dix of Boston, a substantial landowner in the area, promised to donate a library for the town if the citizens changed its name from Holmantown to Dixfield. The citizens complied, after which the town received dusty old boxes of medical books printed in German. Dr. Dix also left his name on Dixmont, where he died while visiting in 1809 and was buried.

With several streams for water power, Dixfield developed into a small mill town. It had sawmills and gristmills. It also produced cheese, carriages, shingles, toothpicks, rakes, wooden boxes, flies and leaders, boots and shoes. Dixfield once had a marble works.

There were 1,044 households, of which 34.2% had children under the age of 18 living with them, 50.8% were married couples living together, 12.1% had a female householder with no husband present, 6.3% had a male householder with no wife present, and 30.8% were non-families. 23.7% of all households were made up of individuals, and 9.7% had someone living alone who was 65 years of age or older. The average household size was 2.44 and the average family size was 2.84.

All content from Kiddle encyclopedia articles (including the article images and facts) can be freely used under Attribution-ShareAlike license, unless stated otherwise. Cite this article:
Dixfield, Maine Facts for Kids. Kiddle Encyclopedia.