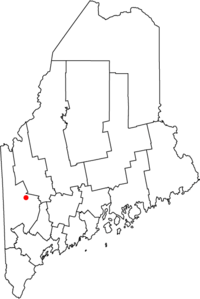 Location of town of Mexico in Oxford County, state of Maine

Mexico is a town in Oxford County, Maine, United States. The population was 2,681 at the 2010 census. Mexico is a small mill town for the papermaking industry.

The land was once part of Holmanstown Plantation, granted by the Massachusetts General Court in 1789 to Colonel Jonathan Holman of Sutton, Massachusetts (now Millbury) and others. In 1803, Dixfield was set off and incorporated. The plantation's remaining portion, which had been first settled by Isaac Gleason, was incorporated on February 13, 1818 as the town of Mexico. The name was inspired by local sympathy for Mexico's 1810–1821 fight for independence from Spain. Then known as Mexico Corner, it developed as a farming community with mills at the streams. In 1894, George W. Ridlon, president of the Rumford Falls Brick Company, founded a settlement in the eastern part of the town called Ridlonville. He erected 30 cottages and The Hotel Ridlon. 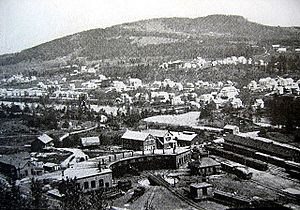 Mexico is located on several hills overlooking the Androscoggin River. Across the river is the town of Rumford, which has a large paper mill. The Swift River empties into the Androscoggin at Mexico's southwest corner, its historic business center positioned in the 19th-century near the source of water power. While the large Androscoggin forms Mexico's southern boundary with Rumford, the smaller Swift River more or less follows its western boundary with that town. Mexico's downtown is located on land formed by the northeast corner of the right-angle junction of the two rivers. These low lying riverbanks in Mexico have flooded many times, including 1936, 1953 and 1987.

This climatic region has large seasonal temperature differences, with warm to hot (and often humid) summers and cold (sometimes severely cold) winters. According to the Köppen Climate Classification system, Mexico has a humid continental climate, abbreviated "Dfb" on climate maps.

All content from Kiddle encyclopedia articles (including the article images and facts) can be freely used under Attribution-ShareAlike license, unless stated otherwise. Cite this article:
Mexico, Maine Facts for Kids. Kiddle Encyclopedia.