Brunswick is a town in Cumberland County in southeastern Maine, United States. The population was 20,278 at the 2010 United States Census. Part of the Portland-South Portland-Biddeford metropolitan area, Brunswick is home to Bowdoin College, the Bowdoin College Museum of Art, the Peary-MacMillan Arctic Museum, The Theater Project, and the Maine State Music Theatre. It is also home to Mid Coast Hospital, one of Maine's newest full-service hospitals; and Parkview Adventist Medical Center that closed in 2015 after filing for bankruptcy. It was home to Naval Air Station Brunswick which was permanently closed on May 31, 2011. 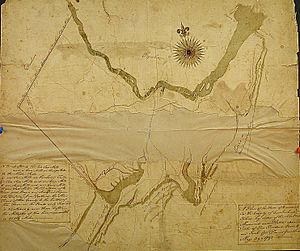 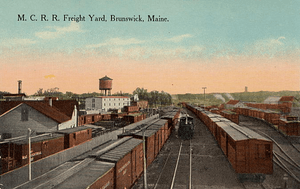 Settled in 1628 by Thomas Purchase and other fishermen, the area was called by its Indian name, Pejepscot, meaning "the long, rocky rapids part [of the river]". In 1639, Purchase placed his settlement under protection of the Massachusetts Bay Colony. During King Philip's War in 1676, Pejepscot was burned and abandoned, although a garrison called Fort Andros was built on the ruins during King William's War. During the war, in Major Benjamin Church's second expedition a year later, he arrived on 11 September 1690 with 300 men at Casco Bay. He went up the Androscoggin River to the English Fort Pejepscot (present day Brunswick, Maine). From there he went 40 miles up-river and attacked a native village. Three or four native men were shot in retreat; when Church discovered 5 English captives in the wigwams, six or seven prisoners were butchered as an example; and nine prisoners were taken. A few days later, in retaliation, the natives attacked Church at Cape Elizabeth on Purpooduc Point, killing 7 of his men and wounding 24 others. On September 26, Church returned to Portsmouth, New Hampshire.

The 1713 Treaty of Portsmouth brought peace to the region between the Abenaki Indians and the English colonists.

In 1714, a consortium from Boston and Portsmouth bought the land, thereafter called the Pejepscot Purchase. The Massachusetts General Court constituted the township in 1717, naming it Brunswick in honor of the House of Brunswick and its scion, King George I. A stone fort called Fort George was built in 1715 near the falls. But during Dummer's War on July 13, 1722, Abenaki warriors from Norridgewock burned the village. Consequently, Governor Samuel Shute declared war on the Abenakis. In 1724, 208 English troops left Fort Richmond and sacked Norridgewock during Dummer's War. Brunswick was rebuilt again in 1727, and in 1739 incorporated as a town. It became a prosperous seaport, where Bowdoin College was chartered in 1794.

The Androscoggin River falls in three successive stages for a total vertical drop of 41 feet (12 m), providing water power for industry. Brunswick became a major producer of lumber, with as many as 25 sawmills. Some of the lumber went into shipbuilding. Other firms produced paper, soap, flour, marble and granite work, carriages and harness, plows, furniture, shoes and confections. The town was site of the first cotton mill in Maine, the Brunswick Cotton Manufactory Company, built in 1809 to make yarn. Purchased in 1812, the mill was enlarged by the Maine Cotton & Woolen Factory Company. In 1857, the Cabot Manufacturing Company was established to make cotton textiles. It bought the failed Worumbo Mill and expanded the brick factory along the falls. Needing even more room, the company in 1890 persuaded the town to move Maine Street.

Brunswick today has a number of historic districts recognized on the National Register of Historic Places, including the Pennellville Historic District preserving shipbuilders' and sea captains' mansions built in the Federal, Greek Revival and Italianate architectural styles. Principal employers for Brunswick include L.L. Bean, Bath Iron Works, as well as companies that produce fiberglass construction material and electrical switches. A number of health services providers serving Maine's mid-coast area are located in Brunswick. The former Naval Air Station Brunswick was a major employer in Brunswick prior to its closure.

The book Uncle Tom's Cabin was written by Harriet Beecher Stowe while she was living in Brunswick, because her husband was a professor at Bowdoin. She got a key vision for the book in the First Parish Church. A scene in the 1993 movie The Man Without a Face was filmed in the town.

There were 8,469 households of which 25.7% had children under the age of 18 living with them; 44.7% were married couples living together; 9.7% had a female householder with no husband present; 3.3% had a male householder with no wife present; and 42.3% were non-families. 35.1% of all households were made up of individuals and 16.5% had someone living alone who was 65 years of age or older. The average household size was 2.19 and the average family size was 2.83. 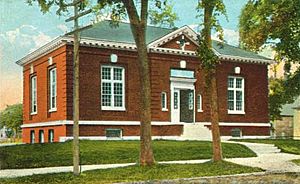 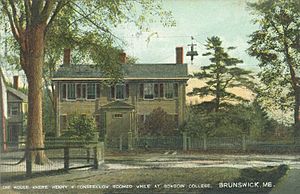 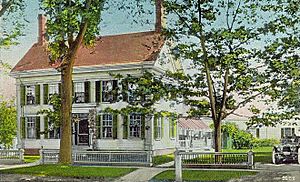 All content from Kiddle encyclopedia articles (including the article images and facts) can be freely used under Attribution-ShareAlike license, unless stated otherwise. Cite this article:
Brunswick, Maine Facts for Kids. Kiddle Encyclopedia.