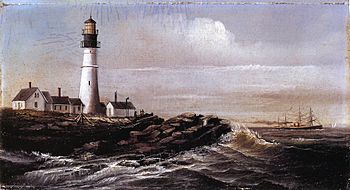 There are two theories on the origin of the name "Casco Bay". Aucocisco is the Abenaki name for the bay, which means 'place of herons' (sometimes translated as 'muddy'). The Portuguese explorer Estêvão Gomes, mapped the Maine coast in 1525 and named the bay "Bahía de Cascos" (Bay of Helmets, based on the shape of the bay).

The first settlement in Casco Bay was that of Capt. Christopher Levett, an English explorer, who built a house on House Island in 1623-24. The settlement failed. The first permanent settlement of the bay was named Casco; despite changing names throughout history, that settlement remains the largest city in the Casco Bay region, now called the city of Portland, Maine

It was first reported in 1700 by Colonel Wolfgang William Römer, an English military engineer, that there were "as many islands as there are days in the year". The United States Coastal Pilot lists 136 islands, leading to the bay's islands being called that Calendar Islands based on the popular myth there are 365 of them. Later, Robert M. York, the former Maine state historian said there are "little more than two hundred islands".

Casco Bay is also home to abandoned military fortifications dating from the War of 1812 through World War II; during World War II, Casco Bay served as an anchorage for US Navy ships.

See Forts of Casco Bay below.

Since Casco Bay was the nearest American anchorage to the Atlantic Lend-Lease convoy routes to Britain prior to US entry into World War II, Admiral King ordered a large pool of destroyers to be stationed there for convoy escort duty in August 1941.

The State Historic Site of Eagle Island was the summer home of Arctic explorer Robert Peary.

Walter Cronkite stated that, in his opinion, the bay offered some of the best sailing in the world.

In 2008, up-and-coming composers Peter J. McLaughlin and Akiva G. Zamcheck wrote a piece in four movements paying homage to the wreck of the Don in Casco Bay in 1941. The piece received critical acclaim from the Portland Press Herald and from fellow Maine composers.

Portland has a substantial fleet of deep-sea fishing vessels which offload their catch primarily at the Portland Fish Exchange. Numerous towns and islands serve as ports for lobster boats. Recreational fishing boats can also be chartered.

During the 1980s and 1990s, Bath Iron Works operated a dry dock in Portland Harbor to repair US Navy vessels, but that operation was discontinued.

Predominant fish in the bay include mackerel, striped bass, and bluefish. Shellfish include lobsters, crabs, mussels, clams and snails. Harbor seals congregate on certain exposed ledges, and whales on occasion swim into the bay, and in a few instances into Portland Harbor. Seagulls, cormorants and varying species of ducks are the most common birds; more rarely osprey, eagles and herons have been sighted. Casco Bay contains bay mud bottoms and banks in some locations, providing important substrates for biota. 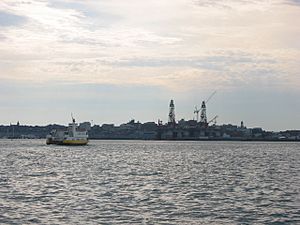 The major islands in the bay are served by the Casco Bay Lines ferry service at the Maine State Pier in Portland. Peaks Island is served by a car ferry and, during the summer, sees 16 ferries a day. The other islands see fewer ferries and no car transport. Great and Little Diamond islands and Long Island are served primarily by the Diamond Pass run, which is popular with tourists in the summer months. Other services offered by Casco Bay Lines include a daily mailboat run, a cruise to Bailey Island, and a sunset run.

Other services such as water taxis are also popular alternatives to the ferry, but are limited to six passengers per boat.

From south to north:

Casco Bay is home to 7 lighthouses:

All content from Kiddle encyclopedia articles (including the article images and facts) can be freely used under Attribution-ShareAlike license, unless stated otherwise. Cite this article:
Casco Bay Facts for Kids. Kiddle Encyclopedia.