South Portland is a city in Cumberland County, Maine, United States, and is the fourth-largest city in the state, incorporated in 1898. As of the 2010 census, the city population was 25,002. Known for its working waterfront, South Portland is situated on Portland Harbor and overlooks the skyline of Portland and the islands of Casco Bay. Due to South Portland's close proximity to air, marine, rail, and highway transportation options, the city has become a center for retail and industry in the region. 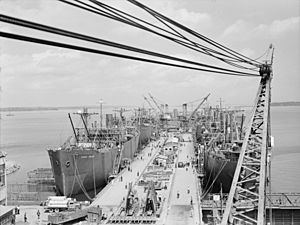 Liberty ships being built along the waterfront (August 1942)

South Portland was first settled in 1630, and it grew to become a small residential community with many farms. The village was raided by natives in Father Rale's War (1724). In 1858, the City of Portland purchased land near the Fore River for the Forest City Cemetery. On March 15, 1895, it was incorporated as a town after it broke away from Cape Elizabeth, based on a disagreement on a future source of public drinking water. Three years later South Portland became a city, destined to receive its drinking water, like Portland, from Sebago Lake, while Cape Elizabeth used wells or other local sources.

On South Portland's waterfront is Fort Preble, which is a military fort established in 1808 to protect Portland Harbor. It was in operation during several American conflicts, including the United States Civil War, World War I, and World War II. Near Fort Preble is Spring Point Ledge Light, which was constructed by the federal government in 1897 to mark a dangerous rock ledge.

In 1940, the Todd-Bath Iron Shipbuilding Corp (later called the “East Yard”) was established to build cargo ships for Britain. When the United States became involved with World War II, the shipyard expanded to include the South Portland Shipbuilding Corp. (aka the “West Yard”), that later combined with the Todd-Bath yard to become the New England Shipbuilding Corporation. These shipyards built 236 of the 440 foot (134 m) long Liberty ships, more than 10 percent of all the Liberty ships constructed during the war years. At its peak, the shipyard employed some 30,000 people, including thousands of women, who took over the jobs vacated by men going into the service. The shipyard gradually ceased operations after the war ended in 1945. Remnants of the shipyards are visible, and there is a memorial to the shipyard and the workers at Bug Light Park. The park is also home to Portland Breakwater Lighthouse, commonly referred to as "Bug Light." 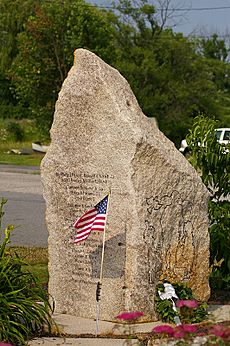 On July 11, 1944, at 4:45 PM, U.S. Army Lt. Phillip "Phee" Russell was attempting to land his Douglas A-26 Invader at the Portland-Westbrook Municipal Airport. For reasons that were never fully determined, Russell lost control of the plane and crashed into a trailer park in South Portland's Brick Hill neighborhood. 19 people were killed and 20 people were injured — mostly the families of South Portland shipyard workers — making it the worst aviation accident in Maine history. A Long Creek Air Tragedy Memorial was eventually erected to commemorate the crash and honor the victims, but not until 66 years later.

Over the last few decades, South Portland has become the retail capital of Maine. The Mill Creek shopping center, built in the 1950s, was the first such "strip mall" built in Maine: a line of stores under one long roof and a covered walkway. Mill Creek has changed and grown significantly since, but the original layout still forms the core of the stores. The area in Mill Creek known as the Waterfront Market sits at the base of the Casco Bay Bridge and attracts shoppers from Scarborough, Cape Elizabeth and Portland.

The need for a large mall in Maine emerged in the 1960s, as Portland's downtown district could not accommodate the growing retail market. A former pig farm in South Portland was chosen as the site for the project because it was close to I-95 and convenient from Portland. Beginning construction of the Maine Mall in the late 1960s marked the start of a major transition in the western part of South Portland: from a rural, agrarian landscape to the large retail center that exists today.

The oldest neighborhood in South Portland, and its former "retail corridor", is Ferry Village. Prior to the Casco Bay Bridge (or the one it replaced, the Million Dollar Bridge), ferries transported people and goods back and forth across the harbor to Portland. The landscape and the makeup of residents in Ferry Village were forever changed upon the close of the WWII shipyards. The Village has slowly bounced back and is now one of the more popular places in the city to live.

Ferry Village also has one of the most active and involved neighborhood associations in Southern Maine. The Ferry Village Neighborhood Conservation Association (FVNCA) was formed in August 1985 to address the development boom in the 1980s which was quickly altering the character of the waterfront and many Greater Portland neighborhoods. FVNCA was instrumental in the formation of the South Portland Land Trust as well as the City-managed Land Bank which provides seed money for the acquisition of available open space. 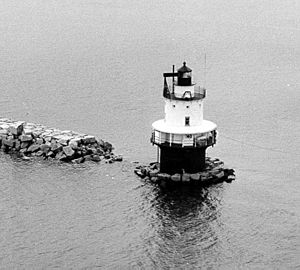 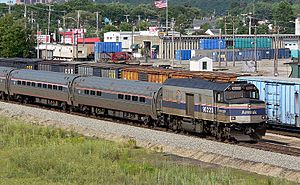 A Downeaster passenger train and a Pan Am Railways freight train at Rigby Yard in South Portland, 2005. 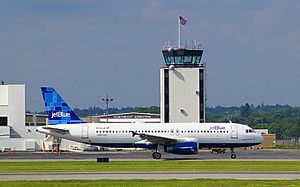 jetBlue airliner at PWM, viewed from the South Portland side of the runway, 2009.

Villages are in bold; neighborhoods are in italics. 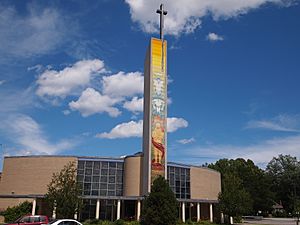 Church of the Nazarene

South Portland offers an array of parks and open space. One of the main features of South Portland is the historic Greenbelt walkway, which is a three-mile (5 km) paved trail that crosses through several neighborhoods and provides views of the harbor. Mill Creek Park is located in South Portland's downtown area and is complete with a beautifully landscaped pond area, bridge and rose garden. The park is host to several local events including summer concerts, Art in the Park, holiday tree lighting and ice skating in the winter. Other notable parks are Wainwright Farm, which is a new recreational facility and Hinckley Park which is a 40-acre (160,000 m2) wooded area that has two ponds. The city's waterfront has several recreational marinas and is home to the last free beach in the area, Willard Beach. 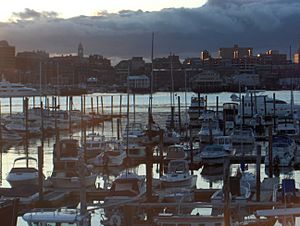 A South Portland marina overlooking the city of Portland. 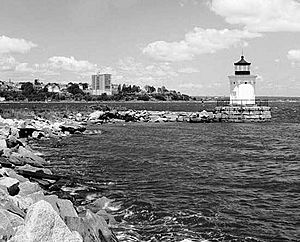 "Bug Light" with Portland's Eastern Promenade in the background.

There were 10,877 households of which 27.6% had children under the age of 18 living with them, 40.6% were married couples living together, 12.0% had a female householder with no husband present, 4.4% had a male householder with no wife present, and 43.0% were non-families. 31.9% of all households were made up of individuals and 11.1% had someone living alone who was 65 years of age or older. The average household size was 2.24 and the average family size was 2.84.

All content from Kiddle encyclopedia articles (including the article images and facts) can be freely used under Attribution-ShareAlike license, unless stated otherwise. Cite this article:
South Portland, Maine Facts for Kids. Kiddle Encyclopedia.