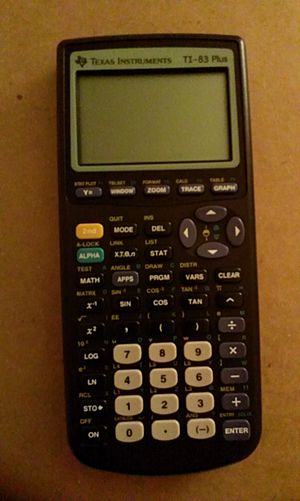 The TI-83 is one of the most popular graphing calculators today.

Texas Instruments Inc. (TI) is a electronics company that makes semiconductors and other electronics, such as calculators. The company started in 1924 in Tulsa, Oklahoma as "Geophysical Research Corporation", a subsidiary of Amerada Petroleum. In 1930, they started a new independent company called Geophysical Service, Incorporated. It became a subsidiary of General Instruments in 1951. The same year the name was changed to Texas Instruments (TI). The company is headquartered in Dallas, Texas. Today TI is the third largest manufacturer of semiconductors in the world after Intel and Samsung. It is the second largest supplier of chips for cellular handsets after Qualcomm. TI is the largest producer of digital signal processors (DSPs) and analog semiconductors. They also make a wide range of other semiconductor products.

All content from Kiddle encyclopedia articles (including the article images and facts) can be freely used under Attribution-ShareAlike license, unless stated otherwise. Cite this article:
Texas Instruments Facts for Kids. Kiddle Encyclopedia.