Portland International Jetport (IATA: PWM, ICAO: KPWM, FAA LID: PWM) is a public airport two miles (3 km) west of downtown Portland, in Cumberland County, Maine. It is owned and operated by the city of Portland. A portion of the Jetport's property, including the main runway, is in the neighboring city of South Portland.

The airport is the busiest in the state. In 2007 it handled a record 1.6 million passengers, up 17.0% from the previous year, and handled 1.7 million passengers in the years 2008–2011. In recent years, the Jetport has benefited from service by low-cost carriers such as Southwest Airlines and JetBlue. A survey conducted in June 2011 found PWM to be the most affordable airport in the region, and the third most affordable in New England. In October 2011, PWM completed a $75 million renovation and expansion of its terminal to allow more airline service and more amenities for passengers. 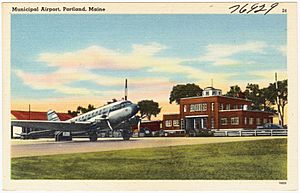 The airfield was founded in the late 1920s by Dr. Clifford "Kip" Strange, who needed space for his JN-4 "Jenny" Biplane. Known as Stroudwater Field, the airport received its first commercial service on August 1, 1931, when Boston-Maine Airways began a flight from Portland to Boston. Two years later, the city of Portland bought the airfield and changed its name to Portland-Westbrook Municipal Airport. "Westbrook" referred to the location of the last directional light before the airport in the nearby city of Westbrook.

Boston-Maine Airways had a monopoly on passenger air travel at Portland, which continued after the airline was renamed Northeast Airlines. Another airline emerged in 1962, when Atlantic Airways began service to Boston's Logan International Airport. This competition was short lived—there is no other information about the airline other than one timetable.

Jet flights began in 1968, and for the first time Portland got a nonstop beyond Boston when Northeast DC-9s flew to LaGuardia Airport in New York. Northeast would be alone at the airport until 1970 when Aroostook Airways began flights between Presque Isle and Portland, with stops in Augusta and Bangor. This airline too faded into obscurity, lasting until 1972.

That year regional Air New England began service in Portland, competing with Northeast Airlines intrastate and between Portland and Boston.

In 1972 Northeast Airlines was bought by Delta Air Lines which retained its routes to Bangor, Boston, and New York. By 1979 Delta had added Burlington, Vermont.

In 1981 Air New England, after serving Portland for 11 years, ceased operations and pulled out of the Jetport. This departure was followed a year later by the arrival of Air Vermont, a regional carrier that flew between Portland and Burlington until expiring about 1983 or 1984.

In 1980 the passenger terminal expanded to the east with the addition of two baggage carousels. The building also expanded to the west by adding three-second-level jetways and a hold room.

In 1982 PWM got its first nonstop beyond New York, when Delta tried a 727 to Cincinnati for a year or so.

Peoplexpress Airlines arrived in 1983, the first jet competitor to Northeast/Delta at PWM. The airline, the first low-cost carrier at the Jetport, was known for rock-bottom prices. The airline flew between Portland and Newark, still operated today by United Airlines who merged with Continental Airlines, which had bought PEOPLExpress in 1987.

In June 1983 United Airlines arrived in Portland, planning to be the only airline to serve 50 states. It originally flew the Burlington route that had been left behind by Air Vermont and later flew nonstop to Chicago.

That same year, regional Ransome Airlines, doing business as Delta Connection, began a route between Portland and Boston. This ended in 1986 when Ransome was bought by Pan Am and renamed Pan Am Express.

1986 also brought US Airways (then USAir), who began flights to Philadelphia and Pittsburgh. Low-cost carrier Presidential Airways also began service from the Jetport in 1986, flying a route from Portland to Washington's Dulles International Airport. This would be short-lived, however, as Presidential Airways ceased operations by the end of the decade.

1987 saw the arrival of Continental Airlines, when the airline bought PEOPLExpress and took over their routes. It saw the beginning of Business Express, a commuter airline offering service from Portland to Boston, New York-LaGuardia, and Presque Isle, originally independently, and then doing business as Delta Connection.

In 1995 a terminal building improvement project was undertaken to add two-second-level boarding gates, as well as additional space for ticketing, operations, departure lounge, concessions, and an international customs facility. 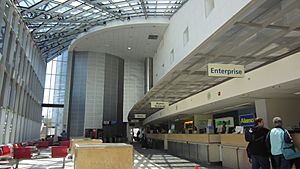 In the wake of the September 11 attacks many U.S. airlines cut flights. This furthered the airlines' shift from mainline jets to smaller regional jets or turboprops at PWM. In late 2002 American Eagle stopped flying to the Jetport.

On September 1, 2005 Delta Air Lines ended mainline service to PWM. Despite the airline's strong history at Portland, serving the Jetport with aircraft as large as the Boeing 727 and 757, Delta briefly downgraded flights subcontracting to smaller aircraft operated by Delta Connection on Bombardier CRJ series. In the late 2000s and continuing today, Delta reinstated mainline service at Portland.

Some service began to return as the industry's economics improved in 2005 and 2006. The first step up came with the introduction of the low cost carrier Independence Air in 2005. On May 1, 2005, Independence added a daily flight to Washington Dulles on an Airbus A319, making them the first carrier to fly an Airbus out of Portland. Portland was one of the few markets that Independence Air consistently served with its A319s, and at the time of its bankruptcy Portland was rumored to be one of its few profitable destinations. FedEx Express also began using an Airbus A310 widebody jet on its cargo flights to Memphis later that year, although today the company primarily uses a 757 for those flights.

After Independence Air went bankrupt Portland had no low-cost carrier, causing fares to go up, and passenger numbers to decline. Capitalizing on the underserved market, JetBlue Airways began service to Portland on May 23, 2006, with four daily flights to New York-JFK aboard Airbus A320 and Embraer 190 jets. This made them the second-largest air carrier at the Jetport (in terms of available seats) nearly overnight. This addition of service inspired what is known as The Southwest Effect, where the addition of a large number of low cost seats in a market forces down the price of competing tickets.

On June 7, 2007 AirTran Airways began seasonal service to Baltimore, and to Orlando. AirTran was the second low-cost carrier in Portland, competing with JetBlue. This was Portland's first scheduled non-stop flight to Florida. AirTran serves the Jetport with Boeing 717s and 737s. At the same time as AirTran's arrival, JetBlue announced that it would be adding a fifth flight to New York City, further increasing the number of available low cost seats. On September 26, 2007 JetBlue announced a daily direct flight to Orlando, using its Embraer 190, beginning in January 2008. The year 2007 was a record high for Portland: the added service posted a 17% increase in passengers from the year before. 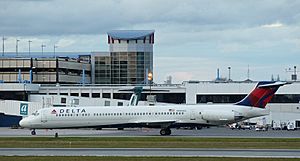 In 2008 Delta Air Lines resumed mainline service to Portland, a daily flight to Atlanta on a McDonnell Douglas MD-88. A regional startup, New England Air Transport (NEAT) began intrastate air service, flying three times weekly to Aroostook County with a Piper Chieftain. This was the first intrastate service offered out of Portland in more than a decade. With these increases, 2008 also saw a number of losses of service, with air traffic in an overall decline as the airline industry scaled back due to the Great Recession.

At the onset of 2009 international service resumed. Starlink Aviation announced service between Portland and Halifax, Nova Scotia and Yarmouth, Nova Scotia, to begin in February of that year. In fall of 2009, PWM built an official plane spotting area on Aviation Boulevard in South Portland, allowing aircraft enthusiasts to observe flights arriving and departing. Prior to the 2001 terrorist attacks, plane spotters observed Jetport activity from Jetport Plaza Road and Jetport Access Road, but such activity was subsequently prohibited in the wake of the attacks due to security concerns. The official plane spotting area includes a sign depicting some of the passenger aircraft typically seen at the Jetport.

In 2010 Starlink Aviation ended its service to Yarmouth and Halifax, Nova Scotia, citing the loss of a Canadian subsidy. Soon after Starlink ended their service, a Maine-based company, Twin Cities Air Service, began flying between Portland and Yarmouth on a semi-daily basis. This began on March 15, 2010. Twin Cities ceased its scheduled service out of PWM in December 2012, but continues to offer the route on a charter basis.

Also in 2010, Air Canada announced that it would be launching a number of new routes out of Toronto, Canada including a flight to Portland. The twice-daily Portland-Toronto service began on May 17, 2010, operated by Air Georgian using Beechcraft 1900D aircraft. Air Canada pulled out of Portland on March 1, 2013, once again leaving PWM without scheduled international service.

The Jetport began construction on its expanded terminal as well as several infrastructure improvements in 2010. Major expansion of the airline terminal – which had already been expanded at least twice – took place throughout 2010 and 2011. The expanded terminal opened to the public on October 2, 2011. The $75 million project, designed by Gensler and built by Turner Construction, brought a number of changes, including improvements to the check-in areas and security, reconfiguration of the airport access road and terminal roads, and rehabilitation and expansion of the parking garage. The new terminal features a geothermal heating and cooling system – the largest of its kind in Maine – which is expected to reduce the Jetport's consumption of heating oil by up to 102,000 gallons per year. Expansion and improvements are also planned or are in-work for the General Aviation ramp, enlarging the cargo ramp and facilities, re-configuring the alignment of taxiways, improving the airport's deicing facilities, and lengthening Runway 18/36.

A survey conducted in June 2011 by travel web site Cheapflights found PWM to be an affordable airport in the region compared to (Manchester, Bangor, and Logan), and the third most affordable in New England (behind Bradley and T. F. Green). 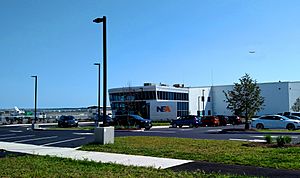 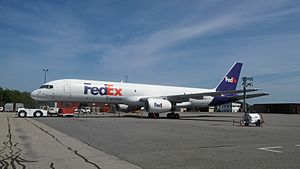 The airport is accessible from I-95 (the Maine Turnpike) and I-295. The jetport provides ample parking space in multiple ground lots as well as two parking garages, with rates ranging from $10–$12 per day. A complimentary cellphone lot is available just outside the baggage claim area. METRO Bus and taxi service can be accessed from the ground transportation booth outside the baggage claim. A shuttle bus service called The Portland Explorer provides access to area hotels and to other local transportation, such as the Amtrak Downeaster train service, and Concord Coach Lines intercity bus service at the Portland Transportation Center.

All content from Kiddle encyclopedia articles (including the article images and facts) can be freely used under Attribution-ShareAlike license, unless stated otherwise. Cite this article:
Portland International Jetport Facts for Kids. Kiddle Encyclopedia.