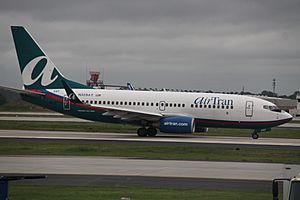 AirTran was a low-cost American airline formerly known as ValuJet. It's hub was in Atlanta, Georgia and it operated routes throughout the Americas.

ValuJet's first flight was in 1993. In 1996, ValuJet Flight 592, a DC-9 aircraft, crashed into the Everglades shortly after takeoff from Miami International Airport, after a fire on board. 110 people died in the crash. The NTSB blamed Valujet's maintenance contractor, SabreTech for improper maintenance.

After the large amount of negative publicity surrounding this tragedy, ValuJet suffered serious financial problems and nearly went bankrupt. It merged with a smaller airline called AirTran and assumed its name in 1997.

After management turnover and some replacement of older airplanes, AirTran appears to have turned around financially and has become profitable, even in the very difficult business environment encountered by all U.S. airlines since the September 11 Attacks.

In 2011, AirTran merged with Southwest Airlines. The merger was completed in 2014 and the AirTran name was no longer used.

All content from Kiddle encyclopedia articles (including the article images and facts) can be freely used under Attribution-ShareAlike license, unless stated otherwise. Cite this article:
AirTran Airways Facts for Kids. Kiddle Encyclopedia.