Aroostook County is a county located in the U.S. state of Maine along the Canada–US border. As of the 2010 census, the population was 71,870. Its seat is Houlton.

Aroostook County is known for its potato crops, as well as its Acadian culture. In the Saint John Valley in the northern part of the county, which borders Madawaska County, New Brunswick, many of the residents are bilingual in English and Acadian French. Elsewhere in Maine, New England French is the predominant form of French spoken (apart from standard French).

The county is also an emerging hub for wind power. 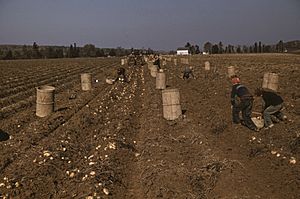 Children gathering potatoes on a large farm in Aroostook County, 1940. Schools did not open until the potatoes were harvested. Photo by Jack Delano.

The county was also part of a route on the Underground Railroad, and was one of the last stops before entering Canada. Slaves would meet and hide just outside Aroostook or in deserted areas. Friends Quaker Church near Fort Fairfield was often a final stop.

During the post World War II era, much of Aroostook County's economy was dominated by military spending. In 1947, the Limestone Army Air Field was built in Limestone, Maine. It began use in 1953 and was renamed the Loring Air Force Base. Aroostook County was chosen due to its strategic location as the closest point in the Continental United States to Europe. The 1991 Base Realignment and Closure Commission recommended closure of Loring and the Base closed in 1994.

The 2014 Acadian World Congress was held along the Canada–United States border, co-hosted by Aroostook County and a number of neighboring counties in Canada (Témiscouata in Quebec, and Victoria, Madawaska and Restigouche in New Brunswick). Organizers planned a Tintamarre that was held in the town of Madawaska, Maine, as well as a giant tug of war across the Saint John River.

All content from Kiddle encyclopedia articles (including the article images and facts) can be freely used under Attribution-ShareAlike license, unless stated otherwise. Cite this article:
Aroostook County, Maine Facts for Kids. Kiddle Encyclopedia.