Crouseville is an unincorporated village located within the town of Washburn in Aroostook County, Maine, United States. 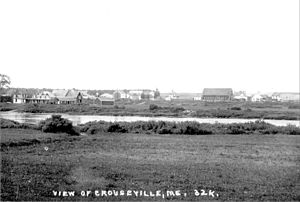 In 1800 the future Crouseville, Maine, did not have any particular name. In 1826 it was first surveyed by Joseph Norris, whereupon it became known only as a part of Township 13, Range 3. 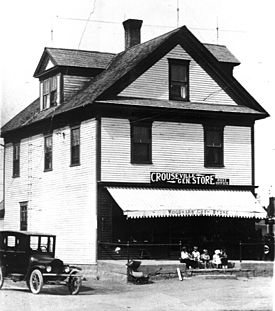 The early settlers living along the Aroostook River couldn’t be certain if they lived in New Brunswick, a North American British Colony, or the United States. In 1839 the United States formed Aroostook County. This was an effort by the United States to lay claim to the area. In 1842 the Webster-Ashburton Treaty firmly established the area as United States territory, yet some townships in Maine were administratively part of Massachusetts, the mother state.

Salmon Brook Township (Township 13, Range 3), organized as the Plantation of Salmon Brook in the winter of 1844-1845, was one of the townships that belonged to Massachusetts, until about 1852. During this time the Crouseville area was called East Salmon Brook.

In 1850 pioneers Gould and Hepzibah (Clark) Crouse emigrated from the British Colony of New Brunswick. They, along with the families of their children, Jeremiah, Abraham, William, Esther, Ann, Jesse, Gould, Jr. and Joshua, homesteaded much of the Crouseville area.

The nearby village of Salmon Brook incorporated into the city of Washburn in 1861 and East Salmon Brook thereafter was commonly referred to as East Washburn. Finally, in 1897, the community was formally named Crouseville, after pioneers Gould and Hepzibah Crouse and their descendants.

This climatic region is typified by large seasonal temperature differences, with warm to hot (and often humid) summers and cold (sometimes severely cold) winters. According to the Köppen Climate Classification system, Crouseville has a humid continental climate, abbreviated "Dfb" on climate maps.

All content from Kiddle encyclopedia articles (including the article images and facts) can be freely used under Attribution-ShareAlike license, unless stated otherwise. Cite this article:
Crouseville, Maine Facts for Kids. Kiddle Encyclopedia.