Kids Encyclopedia Facts
This page is about the Maine city. For other areas, see Presque Isle.

Presque Isle is the headquarters of the Aroostook Band of Micmac, a federally recognized tribe.

The first European settlers were British Loyalists who reached the area in 1819 hoping to obtain land for lumber. Border disputes between the United States and Great Britain over the area, however, made it impossible for pioneers to gain title to the land. In response, the government of the neighboring British colony of New Brunswick (now a Canadian province) gave out patents for pioneers to live on the land but not claim ownership or sell it. By 1825, surveyors traveling along the Aroostook river noted that twenty families lived along it and noted that while agriculture was present, all of the families employed most of their time towards wood production.

The boundary dispute slowed development in the area, but the government of Massachusetts, which governed the territory at the time, saw the territory as theirs and encouraged the development of settlements in northern Maine by offering land grants and mill privileges in the 1820s. The first American to settle in the area was Dennis Fairbanks in 1828 who gained ownership over the land under the provisions set up by Massachusetts and later Maine, which gained statehood in 1820.

Originally known as Fairbanks for its founder Dennis Fairbanks, Presque Isle was settled in 1828 on land that was unknown to be part of British North America (Canada) or the United States. The Aroostook War broke out in 1838 because of boundary disputes between the two countries, which were resolved in 1842 by the Webster-Ashburton Treaty. The township was incorporated from Plantations F, G and H on April 4, 1859 as Presque Isle, the French term for peninsula (presqu'île), as the courses of the Aroostook River and Presque Isle Stream form a peninsula. In 1864, Fairmount Cemetery was established in the south of Presque Isle to accommodate Union soldiers returning from the Civil War. In 1883, the town of Maysville was annexed.

On January 1, 1940, Presque Isle was incorporated as a city.

The first industry to form in Presque Isle was the lumber industry. By the 1880s, industry included two lumbermills, a gristmill, a wool carding mill, a furniture factory, a carriage factory and a tinware factory.

During the last 30 years of the 19th century, agriculture became important, and the entire county became noted for its production of potatoes. On October 9, 1851, the first Northern Maine Fair exhibition opened. A starch factory was opened in 1874, providing a ready market for local potatoes. In 1914 the Aroostook Farm was purchased as a Maine Agricultural Experiment Station.

In 1881 the New Brunswick Railway created the first rail connection in Presque Isle. The Bangor and Aroostook Railroad arrived in 1895.

A small airport was established in 1931. It was expanded within the decade and later assumed major military importance. The Presque Isle Air Force Base, in operation between 1941 and 1961, was a major departure point for U.S. fighter planes during World War II and the Korean War due to its relative proximity to Europe. The former base is now the Northern Maine Regional Airport at Presque Isle, the Northern Maine Community College, and the Skyway Industrial Park.

In 1903, the Aroostook State Normal School began offering a two-year teacher preparation program. In 1968, it was renamed the University of Maine at Presque Isle. Northern Maine Technical College was established in 1961, now Northern Maine Community College. The first students entered the college in 1963. Today it serves about 2000 students.

The first Presque Isle Hospital was established on April 8, 1912. Four physicians were affiliated with the hospital, whose dual aims were to serve the community and to provide a training school for nurses. The building was a white-frame structure, enlarged from a home under construction. The need and demand for the hospital increased so rapidly that in 1921 a new three-story brick hospital was dedicated. This hospital was in operation for nearly four decades, when it, too, proved inadequate. A major fundraising campaign was launched in the late 1950s. After a large donation was given by Mr. and Mrs. W. H. Wildes, the daughter of the late Senator Arthur Gould, the Arthur R. Gould Memorial Hospital was constructed and opened in 1960. The hospital has expanded and been modernized in recent years and in 1981 became a part of The Aroostook Medical Center.

On August 11, 1978, the Double Eagle II was launched from a Presque Isle field carrying three passengers. It made the first successful transatlantic balloon crossing. In honor of the Double Eagle II, the city holds an annual celebration called The Crown of Maine Balloon Festival. The popular event includes balloon rides, plane tours, amateur photo contests and children’s fair rides. Sponsored by the Chamber of Commerce and other local organizations, it is held in late August. The field from which the Double Eagle II lifted off now features a commemorative model balloon.

Presque Isle was named an All American City in 1966. 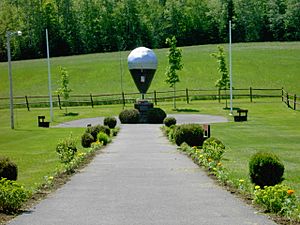 Is the focal location for operations in Island in the Sky (1953 film).

Due to being Aroostook County's largest city, Presque Isle is the retail center for a large number of both American and Canadian towns. The Aroostook Centre Mall became a major shopping center for residents during the 1990s. A Super Walmart center also attracts a large number of shoppers. Agriculture remains a top industry of Presque Isle and the surrounding area, with potatoes being the top crop. During the winter months many local businesses rely on the snowmobiling industry as there is a highly regarded trail system connecting far away towns and cities with Presque Isle. Presque Isle is also home to a significant industrial park near the Presque Isle International Airport.

The unemployment rate in Presque Isle is typically somewhat higher than the average across Maine.

All content from Kiddle encyclopedia articles (including the article images and facts) can be freely used under Attribution-ShareAlike license, unless stated otherwise. Cite this article:
Presque Isle, Maine Facts for Kids. Kiddle Encyclopedia.