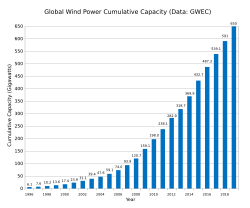 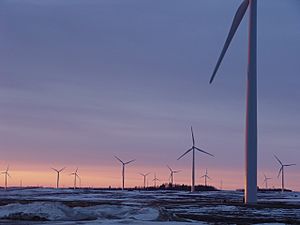 Wind power is the conversion of the energy in wind into a more useful form of energy, like electricity. It is a renewable source of energy that helps to cut down on the pollution of earth's air.

Wind power capacity has expanded quickly to 336 GW in June 2014, and wind energy production was about 4% of total worldwide electricity usage, and growing fast. Wind power is widely used in European countries, and more recently in the United States and Asia. In 2012 wind power accounted for approximately 30% of electricity generation in Denmark, 20% in Portugal and 18% in Spain.

Wind power stations use the wind to turn a turbine which turns a magnet inside a coil (a type of generator). The wind has kinetic energy (Movement energy) which is changed into mechanical energy by the blades on the turbine. The turbine then turns a generator which creates electrical energy (voltage). The turbine is usually connected by a [gearbox] to help control the speed it turns the generator at.

Wind turbines have to be carefully placed. They must be in positions where there is a constant, steady supply of wind. In fact, the wind must not become too strong or it may damage the turbine. Because wind is uncontrollable, so is the amount of power that wind turbines will produce, making them a possibly unreliable source of energy. Some people also consider wind turbines to be ugly and unsightly. Also, huge numbers of electricity pylons ("transmission towers") are built on land to carry the electricity to the electric company. These pylons in areas of natural beauty are a major reason for local people to object to wind farms and their consequences.

All content from Kiddle encyclopedia articles (including the article images and facts) can be freely used under Attribution-ShareAlike license, unless stated otherwise. Cite this article:
Wind power Facts for Kids. Kiddle Encyclopedia.