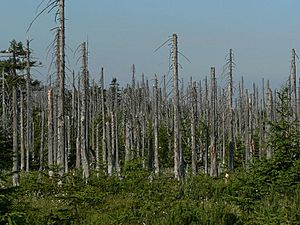 Acid rain can make the leaves fall off trees 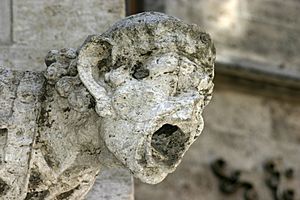 A gargoyle that has been damaged by acid rain

Acid rain is rain that is unusually acidic. The acids are made when certain gases are carried high into the sky and react with the water in the atmosphere.

Acid rains can be harmful to plants, animals, and humans.

Robert Angus Smith is credited with the term "acid rain." In 1852, he showed the relationship between acid rain and atmospheric pollution in Manchester. 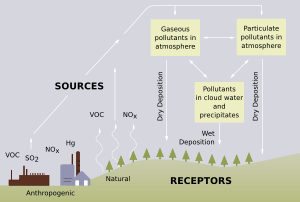 Although some natural gases, such as carbon dioxide, and gases from volcanoes can cause acid rain, it is now believed that mankind causes most acid rain. When people began building and using factories and power stations, they burned coal or oil. These compounds have sulfur in them that releases into the air, mixes with other elements, and produces acid rain.

Since the 1970's, governments have tried to clean smoke from factories and power stations in order to keep too much sulfur from rising to the atmosphere. This has had good results, but it is expensive.

In 2001, Great Britain still produced about five million tonnes (metric tons) of these gases every year, while China produced 18 million tonnes. The United States produced more than 20 million tonnes, but in 2010 that number fell to 8.1 million. 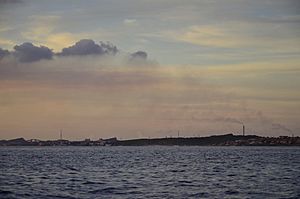 Acid clouds can grow on SO2 emissions from refineries, as seen here in Curaçao

The pH level in lakes needs to be correct for fish to be able to survive, and acid rain can affect a lake's pH level. If there is too much acid in the water several things can happen: 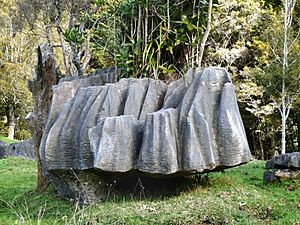 Acid rain can damage soil by killing microbes that are needed in the soil. The hydrogen ions of acid rain also allow toxins to move in the soil and take away nutrients that the soil needs. Forests usually are the home to fungi, but acid rain changes the soil, making it more filled with bacteria. Many trees in the forest depend on the fungi for water and minerals, while the fungi take carbohydrates from the trees. This symbiotic relationship can be destroyed by acids. 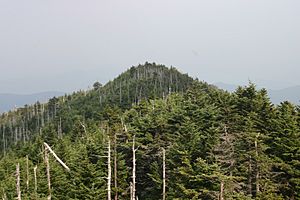 Acid rain affects both living and non-living things. The leaves and roots of trees are damaged, making them less able to make food (photosynthesis) and absorb nutrients. Toxic ions released due to acid rain are dangerous to humans. It is believed that copper (mobilized by acids) has caused outbreaks of diarrhea in young children. Statues and other ancient structures have also been harmed by acid rain. 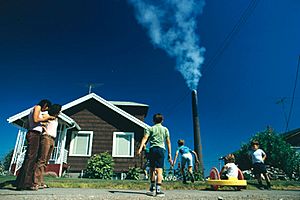 Children play in the yard of a Ruston, Washington home, while a Tacoma smelter stack showers area with arsenic and lead residue

In the U.S., the method for keeping sulfur from escaping into the air from the smokestacks of factories is called Flue Gas Desulfurization (FGD). One popular example is a wet scrubber, which pulls the gases from the stack into a tower and cleans them using lime or limestone. This changes the form of the chemical into a calcium sulfate that can be taken out of the scrubber. Sometimes the sulfates are sold to chemical companies. Other times, they are put in a landfill. 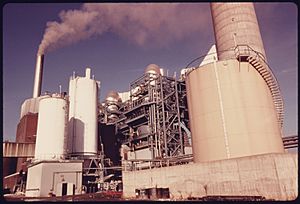 Some people do not want power generation to be controlled because they feel that pollution is a natural consequence of factories and power stations. They believe that if the pollution is not handled properly, it could be dangerous. Others install pollution controls for the benefits that they will receive from them.

All content from Kiddle encyclopedia articles (including the article images and facts) can be freely used under Attribution-ShareAlike license, unless stated otherwise. Cite this article:
Acid rain Facts for Kids. Kiddle Encyclopedia.