Kids Encyclopedia Facts
This page is about the North Carolina mountain. For other uses, see Mount Mitchell (disambiguation). 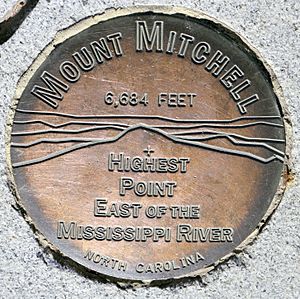 The peak is the highest mountain in the United States east of the Mississippi River, and the highest in all of eastern North America south of the Arctic Cordillera. The nearest higher peaks are in the Black Hills of South Dakota and the highland foothills of Colorado.

The mountain, previously known as Black Dome for its rounded shape, was named after Elisha Mitchell, a professor at the University of North Carolina, who first explored the Black Mountain region in 1835, and determined that the height of the range exceeded by several hundred feet that of Mount Washington in New Hampshire, commonly thought at the time to be the highest point east of the Rocky Mountains. Mitchell fell to his death at nearby Mitchell Falls in 1857, having returned to verify his earlier measurements.

A 4.6-mile (7.4 km) road (NC 128) connects the scenic Blue Ridge Parkway to a parking lot where a steep paved 980-foot (300 m) trail leads through a conifer forest to the summit. The 40-foot (12 m) stone observation tower on the summit was torn down in late 2006. A new observation deck was constructed and opened to visitors in January 2009. Also on the summit is the tomb of Dr. Mitchell.

Mount Mitchell was formed during the Precambrian when marine deposits were metamorphosed into gneiss and schist. These metasedimentary rocks were later uplifted during the Alleghenian orogeny. The soils are well drained, dark brown and stony with fine-earth material ranging in texture from sandy clay loam to loam or sandy loam; Burton and Craggey are the most common series around the summit.

360-degree panorama from the summit of Mount Mitchell

All content from Kiddle encyclopedia articles (including the article images and facts) can be freely used under Attribution-ShareAlike license, unless stated otherwise. Cite this article:
Mount Mitchell Facts for Kids. Kiddle Encyclopedia.