List of U.S. states and territories by elevation facts for kids 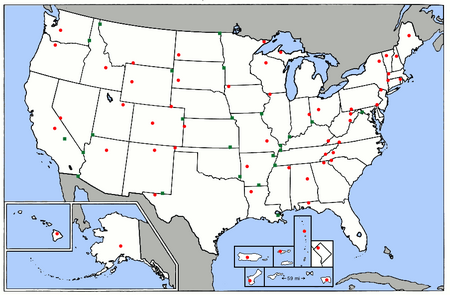 State and territory high points are shown as red circles. Low points are shown with green squares, except in states / territories whose lowest elevation spans coastlines or lake shores (the Great Lakes or Lake Champlain). California and Louisiana have coastlines, but also have low points below sea level. The 5 major U.S. territories and the District of Columbia are in insets. The U.S. Minor Outlying Islands are not on the map.

The elevation of the U.S. states, the federal district, and the territories may be described in several ways. These include:

The following list is a comparison of elevation absolutes in the United States. Data include interval measures of highest and lowest elevation for all 50 states, the District of Columbia, and territories.

Which state or territory is "highest" and "lowest" is determined by the definition of "high" and "low". For instance, Alaska could be regarded as the highest state because Denali, at 20,310 feet (6,190.5 m), is the highest point in the United States. However, Colorado, with the highest mean elevation of any state as well as the highest low point, could also be considered a candidate for "highest state". Determining which state is "lowest" is equally problematic. California contains the Badwater Basin in Death Valley, at 279 feet (85 m) below sea level, the lowest point in the United States; while Florida has the lowest high point, and Delaware has the lowest mean elevation. Florida is also the flattest state, with the smallest difference between its highest and lowest points.

The list of highest points in each state is important to the sport of highpointing, where enthusiasts attempt to visit the highest point in each of the contiguous 48 states, or in all 50 states, or in all 50 states plus the District of Columbia and the territories. As of 2006, 155 people had reached the fifty state highpoints. Roughly 200–300 people attend the Highpointers Club convention each year.

All elevations in the table below have been adjusted to the North American Vertical Datum of 1988. The mean elevation for each state, the District of Columbia and Puerto Rico is accurate to the nearest 100 ft (30 m). Mean elevation data is unavailable for the other U.S. territories.

All content from Kiddle encyclopedia articles (including the article images and facts) can be freely used under Attribution-ShareAlike license, unless stated otherwise. Cite this article:
List of U.S. states and territories by elevation Facts for Kids. Kiddle Encyclopedia.