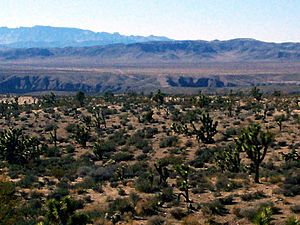 The Beaver Dam Wash is a seasonal stream near the southwestern Utah-Nevada border in the United States. At its southern end in northern Arizona, near the point where it empties into the Virgin River, the stream flows throughout the year. Part of the wash is in the Beaver Dam Wash National Conservation Area, managed by the Bureau of Land Management. The wash was so named on account of beaver dams which once were built on its course.

The wash occupies a transition zone among the Colorado Plateau, the Great Basin, and the Mojave Desert ecosystems. Like all such zones, this area supports diverse vegetative communities and a rich array of wildlife. The wash begins in the Clover Mountains in Lincoln County, Nevada and flows south across very sparsely populated desert terrain. The area around the wash, including a number of protected wilderness areas, includes forests of Joshua trees along with other yuccas, cholla cactus, barrel cactus, Mormon Tea, and other grasses and shrubs, the primary vegetation in the area.

Animal life in the area consists of a variety of lizards, mammals, birds, and insects, and other creatures found in the Mojave Desert. The lower elevations provide designated critical habitat for the threatened desert tortoise and other native species, such as desert bighorn sheep, gila monster, and mojave rattlesnake.

Flash floods are common in the area when heavy summer monsoon thunderstorms dump heavy amounts of rain in short times causing water to fill washes and gulleys in the area. Most precipitation comes in concentrated storms that are infrequent. Generally, the air is low in humidity and dry. Windy conditions also are common throughout the year.

All content from Kiddle encyclopedia articles (including the article images and facts) can be freely used under Attribution-ShareAlike license, unless stated otherwise. Cite this article:
Beaver Dam Wash Facts for Kids. Kiddle Encyclopedia.