The Gila monster is heavy and slow for a lizard. It can grow up to 2 feet(60 cm) long. Its skin looks like beads and is black, pink, orange, and yellow. It looks a lot like the Mexican beaded lizard, which is its closest relative.

The Gila monster can bite quickly and hold on tightly, but it does not kill humans. It usually eats small rodents, young birds and eggs. The lizard chews its prey, injecting its venom (poison) into the animal through teeth in its lower jaw. The Gila monster can also store food in its tail.

In 2005 a medicine to treat diabetes was made from the Gila monster’s saliva. Some people who take it call it "lizard spit" as a joke.

The Gila monster has one close living relative, the beaded lizard (H. horridum), as well as many extinct relatives in the Helodermatidae, the evolutionary history of which may be traced back to the Cretaceous period. The genus Heloderma has existed since the Miocene, when H. texana lived, and fragments of osteoderms from the Gila monster have been found in late Pleistocene (10,000–8,000 years ago) deposits near Las Vegas, Nevada. Because the helodermatids have remained relatively unchanged morphologically, they are occasionally regarded as living fossils. Although the Gila monster appears closely related to the monitor lizards (varanids) of Africa, Asia and Australia, their wide geographical separation and the unique features not found in the varanids indicate the Gila monster is better placed in a separate family.

Plate from the Century Cyclopedia depicts the Gila monster

The name "Gila" refers to the Gila River Basin in the U.S. states of New Mexico and Arizona, where the Gila monster was once plentiful. Heloderma means "studded skin", from the Ancient Greek words helos (ἧλος), "the head of a nail or stud", and derma (δέρμα), "skin". Suspectum comes from the describer, paleontologist Edward Drinker Cope, who suspected the lizard might be venomous due to the grooves in the teeth. 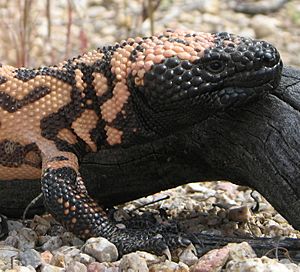 The Gila monster is found in the Southwestern United States and Mexico, a range including Sonora, Arizona, parts of California, Nevada, Utah, and New Mexico (potentially including Baja California). They inhabit scrubland, succulent desert, and oak woodland, seeking shelter in burrows, thickets, and under rocks in locations with ready access to moisture. In fact, Gila monsters seem to like water and can be observed immersing themselves in puddles of water after a summer rain. They avoid living in open areas such as flats and farmland.

Gila monsters spend 90% of their time underground in burrows or rocky shelters. They are active in the morning during the dry season (spring and early summer); later in the summer, they may be active on warm nights or after a thunderstorm. They maintain a surface body temperature of about 30 °C (86 °F). Gila monsters are slow in sprinting ability, but they have relatively high endurance and maximal aerobic capacity (VO2 max) for a lizard. They are preyed upon by coyotes and raptors.

The Gila monster eats small birds, mammals, frogs, lizards, insects, and carrion. The Gila monster feeds primarily on bird and reptile eggs, and eats infrequently (only five to ten times a year in the wild), but when it does feed, it may eat up to one-third of its body mass. It uses its extremely acute sense of smell to locate prey, especially eggs. Its sense of smell is so keen, it can locate and dig up chicken eggs buried 15 cm (6 in) deep and accurately follow a trail made by rolling an egg.

Prey may be crushed to death if large or eaten alive if small, swallowed head-first, and helped down by muscular contractions and neck flexing. Unusually, after food has been swallowed, the Gila monster immediately resumes tongue flicking and search behavior, probably as a result of a history of finding clumped prey such as eggs and young in nests. Gila monsters are able to climb trees and cacti in search of eggs. 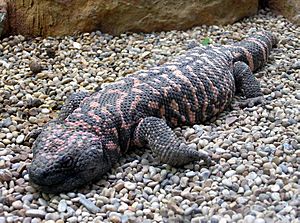 Gila monster at the Bristol Zoo

The Gila monster emerges from hibernation in January or February and mates in May and June. The male initiates courtship by flicking his tongue to search for the female's scent. If the female rejects his advances, she will bite him and crawl away.

The female lays eggs in July or August, burying them in sand 5 in (13 cm) below the surface. The clutch consists of two to 12 eggs: five is the average. The incubation lasts nine months, as the hatchlings emerge during April through June the following year. The hatchlings are about 16 cm (6.3 in) long and can bite and inject venom upon hatching. The juveniles typically have larger bands of pink scales than adults, although the banded Gila monster (H. s. cinctum) has a tendency to retain the band pattern. H. suspectum sexually matures at three to five years old. After egg-laying, adult Gila monsters gradually spend less time on the surface to avoid the hottest part of the summer (although they may be active in the evening), eventually starting their hibernation around November.

Little is known about the social behavior of H. suspectum, but they have been observed engaging in male-male combat, in which the dominant male lies on top of the subordinate one and pins it with its front and hind limbs. Both lizards arch their bodies, pushing against each other and twisting around in an effort to gain the dominant position. A wrestling match ends when the pressure exerted forces them to separate, although bouts may be repeated one after the other. These bouts are typically observed just before the mating season.

In 2005, the US Food and Drug Administration approved the drug exenatide (marketed as Byetta) for the management of type 2 diabetes. It is a synthetic version of a protein, exendin-4, derived from the Gila monster's saliva. The effectiveness is because the lizard protein is about 50% identical to glucagon-like peptide-1 analog (GLP-1), a hormone released from the human digestive tract that helps to regulate insulin and glucagon. The lizard protein remains effective much longer than the human hormone, helping diabetics keep their blood sugar levels under control. Exenatide slows the emptying of the stomach and causes a decrease in appetite, contributing to weight loss.

The saliva of the Gila monster contains many chemicals which can be deadly. One of these has been shown to affect memory. Several companies have been researching the abilities of this chemical to help memory loss due to various diseases such as Alzheimer’s disease, schizophrenia, and ADHD. Gilatide, derived from exendin-4, has been shown to dramatically heighten memory in a study with mice. Gilatide is likely to be researched further to provide help to Alzheimer’s patients.

All content from Kiddle encyclopedia articles (including the article images and facts) can be freely used under Attribution-ShareAlike license, unless stated otherwise. Cite this article:
Gila monster Facts for Kids. Kiddle Encyclopedia.