The Virgin River is a tributary of the Colorado River in the U.S. states of Utah, Nevada, and Arizona. The river is about 162 miles (261 km) long. It was designated Utah's first wild and scenic river in 2009, during the centennial celebration of Zion National Park.

The river is named for Thomas Virgin, a member of the first American party to see it, led by Jedediah Smith in 1826. Smith named it "Adams River", after then-president John Quincy Adams, but later explorer and mapmaker John C. Fremont gave it its current name. After the Smith party successfully descended the river on the way to California, Thomas Virgin was badly wounded in an attack by Mohave people during the crossing of the Mojave Desert. Virgin recovered from his wounds but was later killed, along with most of Smith's companions, in an attack by Umpqua people (in present-day Oregon).

The Old Spanish Trail followed the Virgin River for part of its length from near St. George to the point it ascended the Mormon Plateau to cross to the Muddy River in present-day Nevada. 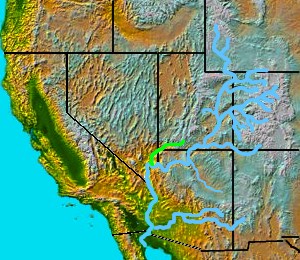 The Virgin River, a tributary of the Colorado, is shown highlighted on a map of the southwestern United States

Its origin is in Southwestern Utah, at the Navajo Reservoir in the Dixie National Forest, north of Zion National Park, and is formed by the confluence of the East Fork Virgin, that flows through Mount Carmel Junction on the east side of Zion National Park and Parunaweap Canyon, with the North Fork Virgin River, that flows from Navajo Lake through Zion Canyon in Zion National Park. The river flows in a southwesterly direction, passing south of the old townsite of St. George where the Santa Clara River joins the Virgin at a place the Paiutes called Tonaquint. The river then flows across the northwestern corner of Arizona through the Virgin River Gorge and past the towns of Beaver Dam and Littlefield. It enters southern Nevada near the town of Mesquite and empties into the Colorado at the Lake Mead reservoir, approximately 40 miles (64 km) east of Las Vegas. The last 30 miles (48 km) of the Virgin River forms the north arm of Lake Mead.

Despite flowing through an arid region, the Virgin River is home to a surprisingly diverse array of plants and animals. Southwestern Utah is located at the intersection of three physiographic regions: the Colorado Plateau, the Great Basin, and the Mojave Desert. The exceptional landscapes and habitats of this region harbor unique plant and animal communities and species found nowhere else in the world. Without the water of the Virgin River system, these species could not exist. The Virgin River directly supports hundreds of wildlife species including, woundfin, Virgin River chub, Virgin spinedace, flannelmouth sucker, desert sucker, speckled dace, and Southwestern Willow Flycatcher. Many of these species are endangered or are considered sensitive species within the State of Utah. The Virgin River Program was established to balance increasing human demand and maintain this unique system.

Woundfin (Plagopterus argentissimus) Federally listed endangered species Size: 4″ (10.2 cm)
One of the rarest species on earth, the endangered woundfin is found only in a small section of the Virgin River. Woundfin have large fins and scale-less, streamlined bodies that help them survive in swift, silty conditions. Although small, it is shark-like in both appearance and action as it feeds on small insects in shallow areas along the river. Woundfin live only one to two years and their survival depends upon sufficient flow within the river, especially during hot summer months.

Desert sucker (Catostomus clarkii) State of Utah wildlife species of concern Size: 18″ (46.4 cm)
The desert sucker gets its name from the way it feeds on aquatic vegetation and insects. It uses its thick cartilaginous lips to scrape and suck food from rocks and boulders along the bottom of the river. Desert Suckers are very colorful during the spring spawning season, developing bright orange and black 'racing stripes' along their sides. Desert suckers are considered a sensitive species in Utah, where they are only found in the Virgin River and its tributaries.

Speckled dace (Rhinichthys osculus) Size: 4 " (10.2 cm)
One of the most widespread species in western North America, the speckled dace is found in large numbers throughout the Virgin River and its tributaries. Speckled dace prefer rocky areas but are comfortable living in all habitats and stream sizes. Speckled dace exhibit a kaleidoscope of shapes and colors across their range. Males display bright red "lipstick" and red fins to attract mates during breeding season.

Southwestern Willow Flycatcher (Empidonax trailii extimus) Federally listed endangered species
The Southwestern Willow Flycatcher occurs in dense riparian habitats along streams rivers, and other wetlands. At low elevations, the flycatcher breeds in dense, patchy habitats composed of mid-sized to tall trees and shrubs. At higher elevations, it occurs in dense stands of low to moderate height riparian shrubs. Vegetation density within 4 m (13 ft) is especially important. Preferred habitats are almost always associated with standing or slow-flowing water. The destruction of riparian habitats has caused a severe decline in the populations of the southwestern willow flycatcher. Currently, this sub-species exists only in fragmented and scattered locations throughout its range. Historically, the breeding range reached from southern California, southern Nevada, southern Utah, Arizona, New Mexico, western Texas, southwestern Colorado, and northwestern Mexico. The flycatcher is a migratory bird that winters in Mexico, Central America, and northern South America. Currently, the breeding range for the flycatcher is similar to the historic range, though much of the riparian habitat in the southwest has been degraded by agricultural practices, invasion of non-native vegetation and urban development. The Southwestern Willow Flycatcher is an insectivore, taking insects from the air, or picking them from the foliage. The Southwestern Willow Flycatcher is present on breeding grounds by mid-May. By late May, nests are built, usually in a branched tree fork near the water. Typically, three eggs are laid and then incubated for 12–13 days.

Flannelmouth sucker (Catostomus latipinnis) State conservation species Size: 2+' (64.8 cm)
The flannelmouth sucker is the largest native fish in the Virgin River, growing over two feet in length and weighing over six pounds. The flannelmouth's thick fleshy lips contain taste buds that help it find food along the bottom of the River, including aquatic invertebrates, organic debris and algae. Flannelmouth suckers are usually found in deep sandy areas of the Virgin River, but large numbers congregate in shallow gravel areas for spawning in the spring. Water in the river's lower valley provides irrigation for the cultivation of cotton, pomegranates, and figs.

All content from Kiddle encyclopedia articles (including the article images and facts) can be freely used under Attribution-ShareAlike license, unless stated otherwise. Cite this article:
Virgin River Facts for Kids. Kiddle Encyclopedia.