Beaver Dam is a census-designated place (CDP) in Mohave County, Arizona, United States, that is located in the Arizona Strip region and was settled in 1863. It is located along Interstate 15 approximately 10 miles (16 km) northeast of Mesquite, Nevada. It is located in the 86432 ZIP Code. It had a population of 1,962 as of the 2010 census.

Beaver Dam and the neighboring communities of Littlefield, Scenic and Desert Springs have the distinction of being the only towns in Arizona along I-15. Owing to their location in the Arizona Strip, northwest of Grand Canyon National Park and west of the Virgin River, they are isolated by hundreds of miles from the rest of the state. Absent by plane or helicopter, travel to other towns within Arizona requires crossing through either Nevada or Utah, or routing through unpaved roads to the rest of Arizona's road network.

The great Western author and essayist Wallace Stegner reputedly said of the Arizona Strip that "it is connected geographically to Utah, politically to Arizona and neither one cares."

The site of Beaver Dam was located along the pack horse route of the Old Spanish Trail from 1828 and the later wagon route of the Mormon Road between Salt Lake City and Los Angeles from 1847. Beaver Dam Creek and subsequently the town was named for a beaver dam that occupied and held back the waters on the wash when the first Mormon party under Jefferson Hunt established the wagon road through the area in 1847.

The Mormon Road was used by Forty-niners in 1849 and Mormon colonists and other travelers from then on. Both routes passed southward from the Beaver Dam Mountains, to the Virgin River along Beaver Dam Wash to where it met the river. From 1855, the road was a major wagon freighting road until the railroad arrived in Nevada in 1905. Beaver Dam was first settled by Mormon colonists in 1863. 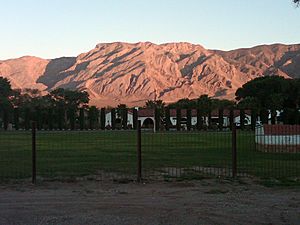 Beaver Dam has been featured as a filming location for a few movies and television shows. 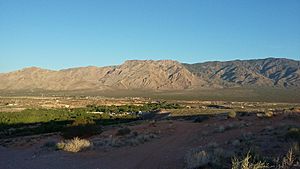 Beaver Dam is home to the three schools that make up the Littlefield Unified School District, the geographically largest school district in Arizona; Beaver Dam Elementary and Beaver Dam Jr./Sr. High School. Beaver Dam and neighboring Littlefield have the distinction of being the only towns in Arizona along I-15. Owing to its location northwest of Grand Canyon National Park and west of the Virgin River, Beaver Dam is essentially isolated from the rest of the state. Travel to other towns within Arizona requires crossing through either Nevada or Utah, or by traversing unpaved roads to Arizona State Route 389 (which is paved) — and even at that, is connected only to the rest of the "Arizona Strip" (that part of Arizona separated from the rest of the state by the Grand Canyon), not to Arizona at large. 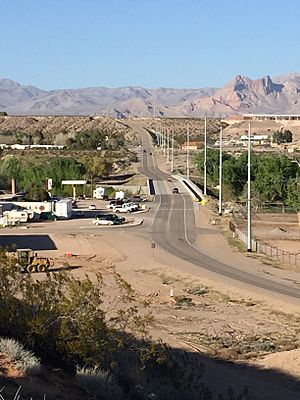 The Virgin River Gorge is located just to the east of Beaver Dam.

Beaver Dam first appeared on the 1930 U.S. Census as District 30 of Mohave County (AKA Beaver Dam). It had 58 residents and was majority White population. With the combination of all 35 county districts into 3 in 1940, it did not formally appear again until 2010, when it was made a census-designated place (CDP).

All content from Kiddle encyclopedia articles (including the article images and facts) can be freely used under Attribution-ShareAlike license, unless stated otherwise. Cite this article:
Beaver Dam, Arizona Facts for Kids. Kiddle Encyclopedia.