Charles Mound is a gentle, 1,235-foot (376 m) high hill in northern Jo Daviess County, Illinois, United States, near the small town of Scales Mound, and 11 miles (18 km) northeast of Galena. It is the highest natural point in the state; thus, it is considered a highpoint.

Charles Mound is the highest natural point in Illinois. (The highest point is the Willis Tower, formerly known as the Sears Tower.) The top of the hill is about 0.25 miles (400 m) from the Wisconsin border. It is within the Driftless Area, a region of Illinois, Iowa, Minnesota, and Wisconsin that was not covered or ground down by the last continental glaciers. The hill itself is an erosional remnant, similar to that on which the original village site of Scales Mound was located. Shallow Elizabeth silt loam soil is on the summit and the surrounding area has deeper silty clay loam of the Lacrescent series. 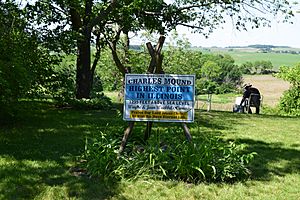 Elijah Charles, one of the region's first permanent settlers, arrived in 1828 and settled at the base of the mound and the hill assumed his name.

Charles Mound is located on rolling farmland. The land owners, Jean and Wayne Wuebbels, allow public access on the first full weekends of the months of June, July, August, and September.

All content from Kiddle encyclopedia articles (including the article images and facts) can be freely used under Attribution-ShareAlike license, unless stated otherwise. Cite this article:
Charles Mound Facts for Kids. Kiddle Encyclopedia.