Kids Encyclopedia Facts
This page is about the county in Illinois. For other counties with similar names, see Daviess County (disambiguation).

Jo Daviess County is a county located in the northwest corner of U.S. state of Illinois. According to the 2010 census, it had a population of 22,678. Its county seat is Galena.

Jo Daviess County was formed in 1827 out of Henry and Putnam Counties. It is named for Maj. Joseph Hamilton Daveiss, United States District Attorney for Kentucky, who was killed in 1811 at the Battle of Tippecanoe. Maj. Daveiss' name is universally misspelled, as in the name of this and other counties. The local pronunciation is "Davis". Jo Daviess County was founded exclusively by immigrants from New England. These were old stock "Yankee" immigrants, meaning they were descended from the English Puritans who settled New England in the 1600s. The completion of the Erie Canal caused a surge in New England immigration to what was then the Northwest Territory. The end of the Black Hawk War led to an additional surge of immigration, once again coming almost exclusively from the six New England states as a result of overpopulation combined with land shortages in that region. Some of these later settlers were from upstate New York and had parents who had moved to that region from New England shortly after the Revolutionary War. New Englanders and New England transplants from upstate New York were the vast majority of Jo Daviess County's inhabitants during the first several decades of its history. These settlers were primarily members of the Congregational Church though due to the Second Great Awakening many of them had converted to Methodism and some had become Baptists before coming to what is now Jo Daviess County. The Congregational Church subsequently has gone through many divisions and some factions, including those in Jo Daviess County are now known as the Church of Christ and the United Church of Christ. As a result of this heritage the vast majority of inhabitants in Jo Daviess County, much like antebellum New England were overwhelmingly in favor of the abolitionist movement during the decades leading up to the Civil War. In the late 1880s and early 1890s Irish and German migrants began moving into Jo Daviess County, most of these later immigrants did not move directly from Ireland and Germany, but rather from other areas in the Midwest where they had been living, particularly the state of Ohio.

Charles Mound, the highest natural point in Illinois at 1235 feet, is located near Scales Mound in Jo Daviess County. 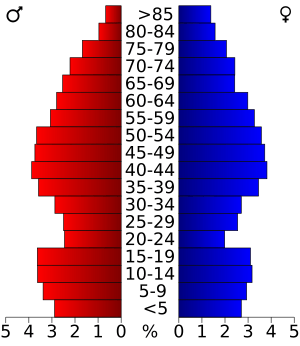 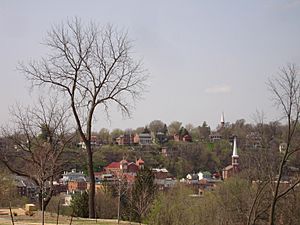 All content from Kiddle encyclopedia articles (including the article images and facts) can be freely used under Attribution-ShareAlike license, unless stated otherwise. Cite this article:
Jo Daviess County, Illinois Facts for Kids. Kiddle Encyclopedia.