Dubuque County is a county located in the U.S. state of Iowa. As of the 2020 census, the population was 99,266, making it the eighth-most populous county in Iowa. The county seat is Dubuque. The county is named for Julien Dubuque, the first European settler of Iowa.

Dubuque County is named for French trader Julien Dubuque, the first European settler of Iowa, and an early lead mining pioneer in what is now Dubuque County. Dubuque was French Canadian, and had (by most accounts) a friendly relationship with the local Fox tribe of Native Americans. He and other early pioneers established a lucrative mining and trading industry in the area. When lead deposits began becoming exhausted, the pioneers developed boat building, lumber yards, milling, brewing, and machinery manufacturing to take its place.

The establishment of the City of Dubuque in 1833 led to large-scale settlement of the surrounding area. This was greatly encouraged by the Roman Catholic Church, which sent priests, bishops, and nuns to establish churches in the unpopulated countryside. Primarily, Irish and German (many of whom were Catholic) immigrants came to the region.

At an extra session of the Sixth Legislative Assembly of Michigan Territory held in September, 1834, the Iowa District was divided into two counties by running a line due west from the lower end of Rock Island in the Mississippi River. The territory north of this line (which started just south of the present-day Davenport) was named Dubuque County, and all south of it was Demoine County [sic]. Thus, at that time Dubuque County nominally included not only much of what is now the state of Minnesota but portions of what are now North Dakota and South Dakota.

Dubuque County became part of Wisconsin Territory once it was split off from Michigan Territory on July 3, 1836. A massive reorganization and reduction of the county's size was executed on December 21, 1837, when its original area was separated into 13 named new counties and a "non-county area". The land in present day Minnesota and the Dakotas was transferred to the newly created Fayette County in this action. Dubuque County became a part of Iowa Territory upon its creation on July 4, 1838.

In 1858, Saint Francis Catholic Church was established in Dubuque County.

In the 1980s, the farm crisis set in, and devastated large sections of the Midwest, including Dubuque County. Since the area was heavily dependent on agriculture-related industries like Deere and Company and the Dubuque Packing Company, unemployment soared. In one month of 1982, Dubuque County had 23% unemployment, the highest in the nation. The county experienced huge population losses during this time, as workers left the area. It would not fully recover from this until the late 1990s, when the economy diversified, shifting away from manufacturing, and toward various service-related establishments.

Since the 1990s, the area has become much more prosperous. Today, the county boasts record employment levels and a growing population. The surging economy can especially be seen in the West Side of the City of Dubuque, and in neighboring Peosta and Asbury. These areas have expanded so much that concerns now lie with trying to manage the growth, a sharp change from just 20 years ago.

It is one of Iowa's two original counties along with Des Moines County; both were organized by the Michigan Territorial legislature in 1834.

The city of Dubuque was chartered in 1833 as the first city in Iowa.

The county borders on Illinois and Wisconsin, and is bounded on the northeast by the Mississippi River. According to the U.S. Census Bureau, the county has a total area of 617 square miles (1,600 km2), of which 608 square miles (1,570 km2) is land and 8.3 square miles (21 km2) (1.4%) is water. The county is drained by north and south forks of the Maquoketa River.

The county seat is Dubuque, Iowa, which is located along the Mississippi River in the east-central portion of the county. Eastern Dubuque County is markedly different from the western portion in that its topography is very uneven. The city of Dubuque and surrounding areas adjacent to the Mississippi River have many steep hills, bluffs, and ravines. Also, the eastern portion is more heavily wooded than the west, which is mostly rolling farmland.

Dubuque County is widely known for its impressive bluffs along the Mississippi River, which run along the entire length of the county's riverbanks. These form part of Iowa's Coulee Region, otherwise known as the Driftless Area. During the last ice age, much of the Mississippi Valley near Dubuque County was bypassed by glacial flows, which flattened the surrounding land in eastern Illinois, Wisconsin, and western Iowa, leaving the Driftless Area unusually rugged.

The Iowa Department of Natural Resources administers 3 park and preserve areas in the county:

The Dubuque County Conservation Board administers 11 park and recreation areas in the county:

The City of Dubuque and other towns in the county also operate public park systems of their own. (see Parks in Dubuque, Iowa) 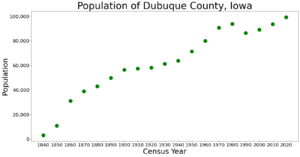 Population of Dubuque County from US census data

The population ranking of the following table is based on the 2010 census of Dubuque County.

Historically, Dubuque County's economy was driven by heavy industry, including, among others, Deere and Company, and the now-defunct Dubuque Packing Company. However, within the last 20 years, and especially within the last 10 years, the economy has diversified a great deal. Now, alongside manufacturing, which still employs thousands of workers, many county residents work in the tourism/gaming, health care, education, publishing, and financial service sectors.

The county's economy is largely centered around business and industry within the City of Dubuque. With the exception of industrial areas in Cascade, Dyersville, and Peosta, almost all of the rest of the county is rural and agriculturally driven. Some of the key industries in Dubuque County include: Deere and Company, Eagle Window & Door Co., Flexsteel Industries, Mi-T-M Corp., A.Y. McDonald Mfg. Co., Klauer Mfg., Georgia-Pacific, and Swiss Valley Farms, among others. Besides industry, large numbers of people work for the Dubuque Community School District, Mercy Medical Center - Dubuque, Medical Associates, Finley Hospital, Prudential Financial, the City of Dubuque, and Cottingham & Butler.

Dubuque County has, in recent years, enjoyed job growth, low unemployment, and the rapid expansion of business and commerce. Alongside these positives, the county is beginning to see a growing population, as well. Up from a recent low of 86,403 in 1990, the population is now about 97,000 and growing. This can be seen especially in the West Side of the City of Dubuque, and in nearby Asbury and Peosta. This fact is especially significant, considering that all of the counties surrounding Dubuque County have fewer people now than they did in 1900, with the exception of Grant County, Wisconsin.

All content from Kiddle encyclopedia articles (including the article images and facts) can be freely used under Attribution-ShareAlike license, unless stated otherwise. Cite this article:
Dubuque County, Iowa Facts for Kids. Kiddle Encyclopedia.