Kids Encyclopedia Facts
Not to be confused with Des Moines, Iowa.

Des Moines County is a county located in the U.S. state of Iowa. As of the 2010 census, the population was 40,325. The county seat is Burlington. It is one of Iowa's two original counties along with Dubuque County; both were organized by the Michigan Territorial legislature in 1834.

At an extra session of the Sixth Legislative Assembly of Michigan Territory held in September, 1834, the Iowa District was divided into two counties by running a line due west from the lower end of Rock Island in the Mississippi River. The territory north of this line (which started just south of the present-day Davenport) was named Dubuque County, and all south of it was Demoine County. It was named after the Des Moines River. From July 3, 1836 until July 3, 1838, Des Moines County was part of Wisconsin Territory. The county underwent various border changes during this time. July 4, 1838, the named county became part of Iowa Territory (later the state of Iowa).

The current Des Moines County Court House was completed in 1940. 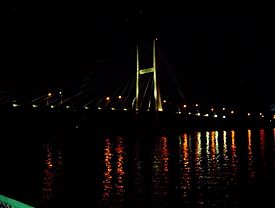 The U.S. Highway 34 bridge over the Mississippi River in Burlington 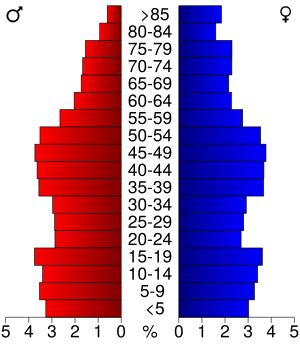 The population ranking of the following table is based on the 2010 census of Des Moines County.

All content from Kiddle encyclopedia articles (including the article images and facts) can be freely used under Attribution-ShareAlike license, unless stated otherwise. Cite this article:
Des Moines County, Iowa Facts for Kids. Kiddle Encyclopedia.