Prior to European settlement, the area was neutral territory for the Sac and Fox Indians, who called it Shoquoquon (Shok-ko-kon), meaning Flint Hills.

In 1803, President Thomas Jefferson organized two parties of explorers to map the Louisiana Purchase. The Lewis and Clark Expedition followed the Missouri River, while Lt. Zebulon Pike followed the Mississippi River. In 1805, Pike landed at the bluffs below Burlington and raised the United States Flag for the first time on what would become Iowa soil and recommended construction of a fort. The recommendation went unheeded. 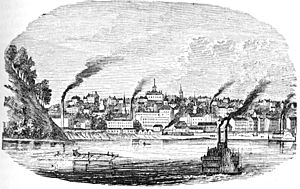 The American Fur Company of John Jacob Astor established a post in the area in 1829. Settlement began in 1833, shortly after the Black Hawk Purchase, when Samuel (aka Simpson) White, Amzi Doolitle, and Morton M. McCarver crossed the Mississippi River from Big Island and staked claims there. According to an account A.T. Andreas wrote in 1875,

In the spring of 1834 they allowed John Gray, who purchased the first lot with his wife Eliza Jane, to rename the town for $50. Gray chose to name it Burlington in honor of his hometown in Vermont. The Grays' daughter Abigail was born in Burlington that same year, the first American settler child born on Iowa soil.

On May 22, 1849, Maj. William Williams visited Burlington, writing a brief description in his journal:

This town [was] originally called Flint Hill- the Indian name was Shoquokon, Flint or Rock Hill. [It is] beautifully elevated, situated on the west side of the Mississippi River, a place of very considerable business. The town is very well built. Houses are good, generally taste[ful], brick dwellings. A great many handsome residences on the more elevated parts of the bluff. The number of inhabitants between 3,000 and 3,500. ... Was the first seat of government after the formation of the Territory of Iowa. The view of the city is extremely picturesque from the river. The main part of the city is situated like an amphitheater formed by the surrounding hills, beautiful buildings and private residences on the eminences around. From the location of Burlington it must always be a place of considerable trade. The city is well built [in the] modern style, a very intelligent population... The river here is over 3/4 of mile wide and steam ferry boats constantly plying between this and the Illinois shore.

Iowa's nickname, "The Hawkeye State," has its roots in Burlington. At Judge David Rorer's suggestion, publisher James G. Edwards changed The Iowa Patriot newspaper's name to The Hawk-Eye and Iowa Patriot in tribute to his friend, Chief Black Hawk. Rorer is said to have found the name in James Fenimore Cooper's The Last of the Mohicans, but Edwards proposed the nickname to "...rescue from oblivian [sic] a momento [sic], at least of the name of the old chief." 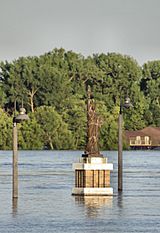 In the late twentieth century, retail expanded with suburbanization of the population. Westland Mall opened in nearby West Burlington in 1977.

There were 10,938 households of which 29.8% had children under the age of 18 living with them, 41.9% were married couples living together, 14.2% had a female householder with no husband present, 5.1% had a male householder with no wife present, and 38.8% were non-families. 32.5% of all households were made up of individuals and 14.1% had someone living alone who was 65 years of age or older. The average household size was 2.30 and the average family size was 2.89.

The town is served by U.S. Route 34, which is the freeway that goes through the middle of town and U.S. Route 61. Iowa Highways 99 and 406 served the town before they were decommissioned in 2003. The two still exist as County roads.

Amtrak, the national passenger rail system, provides service to Burlington, operating its California Zephyr daily in both directions between Chicago, Illinois, and Emeryville, California, across the bay from San Francisco.

Burlington Urban Service (B.U.S.) is a transportation system owned and operated by the City of Burlington. Routes service nearly all areas of Burlington, and nearly 90% of all residents live within 3 city blocks of a bus route. Greyhound Lines and Burlington Trailways provide daily out-of-town bus service.

Burlington has one sister city, as designated by Sister Cities International: 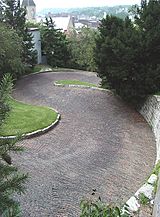 All content from Kiddle encyclopedia articles (including the article images and facts) can be freely used under Attribution-ShareAlike license, unless stated otherwise. Cite this article:
Burlington, Iowa Facts for Kids. Kiddle Encyclopedia.