Ottumwa (/əˈtʌmwə/ ə-TUM-wə) is a city in and the county seat of Wapello County, Iowa, United States. The population was 25,023 at the 2010 census. Located in southeastern Iowa, the city is split into northern and southern halves by the Des Moines River. 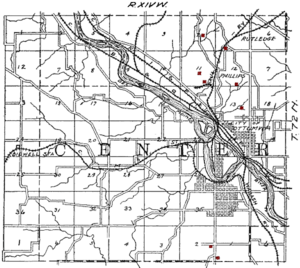 Map of Ottumwa from 1908, showing the railroads and coal mines (shown in red) of the region.

The young town was severely damaged during the Flood of 1851.

In 1857, coal was being mined from the McCready bank, a site along Bear Creek four miles west of Ottumwa. In 1868, Brown and Godfrey opened a drift mine four miles northwest of town. By 1872, Brown and Godfrey employed 300 men and had an annual production of 77,000 tons. In 1880, the Phillips Coal and Mining Company opened a mine two miles northwest of town. In subsequent years, they opened 5 more shafts in the Phillips and Rutledge neighborhoods, just north of Ottumwa. The Phillips number 5 shaft was 140 feet deep, with a 375 horse power steam hoist. By 1889, the state mine inspector’s report listed 15 mine shafts in Ottumwa. In 1914, the Phillips Fuel Company produced over 100,000 tons of coal, ranking among the top 24 coal producers in the state.

Coal mining was so important to the local economy that, from 1890 to 1892, the Coal Palace was erected in Ottumwa as an exhibition center.

John Morrell & Company played a significant role in the development of the City of Ottumwa from 1877 to 1973. The complex typified meat packing as it developed in the midwest during the last quarter of the nineteenth century and the first half of the twentieth century.

Because of the Iowa caucuses, Ottumwa is no stranger to visits by presidential hopefuls. On five occasions a sitting U.S. President has visited the Bridge City: 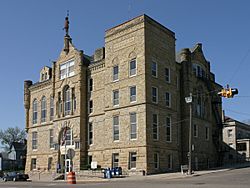 There were 10,251 households of which 30.0% had children under the age of 18 living with them, 42.1% were married couples living together, 12.9% had a female householder with no husband present, 5.6% had a male householder with no wife present, and 39.4% were non-families. 32.9% of all households were made up of individuals and 14.2% had someone living alone who was 65 years of age or older. The average household size was 2.36 and the average family size was 2.97.

"Video Game Capital of the World"

As the home of Twin Galaxies, Ottumwa was proclaimed the "Video Game Capital of the World" by a mayoral decree issued on November 30, 1982, by Ottumwa Mayor Jerry Parker. The city's proclamation was recognized by U.S. Senator Charles Grassley. In connection with this proclamation, the city hosted the first North American Video Olympics in the fall of 1982. In 2009, the city council and chamber of commerce authorized a steering committee to plan out the International Video Game Hall of Fame museum, which, while not yet built, has inducted several video game industry professionals, developers and designers, and high-scoring players into the Hall of Fame. 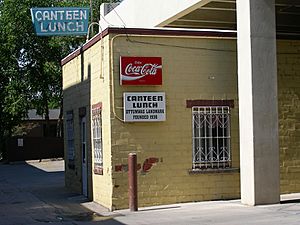 View of Canteen Lunch in the Alley

All content from Kiddle encyclopedia articles (including the article images and facts) can be freely used under Attribution-ShareAlike license, unless stated otherwise. Cite this article:
Ottumwa, Iowa Facts for Kids. Kiddle Encyclopedia.