John Deere (February 7, 1804 – May 17, 1886) was an American blacksmith and inventor. He started Deere & Company, which is a big company that makes farm equipment. In 1837, he invented the first successful steel plow. This worked better with the tough soil of the Midwestern United States.

John Deere was born in Rutland, Vermont. After a brief educational period at Middlebury College, at age 17 in 1821 he began an apprenticeship with a successful Middlebury blacksmith, and entered the trade for himself in 1826. He married Demarius Lamb in 1827 and fathered nine children. John was smart and hard working and he easily found work as a blacksmith. There were lots of farmers in Illinois and John had to fix their plows. 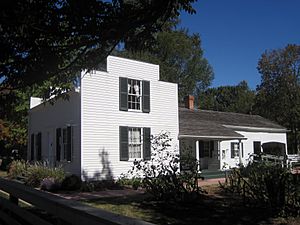 The John Deere House and Shop in Grand Detour, IL, a national landmark 1836

The new farmers in Illinois struggled to turn heavy, sticky prairie soil with cast iron plows designed for the light, sandy soil of Vermont. John thought about the steel needles he had seen in father’s tailor shop. The needles stayed smooth and shiny because they were pulled through rough leather. John Deere came up with the idea for a plow that would work. The plow in his mind was polished and shiny and made of steel just like his father’s tailoring needles. It was shaped so that it could scour itself as it cut furrows. In 1837, he created his plow using a broken saw blade.

John sold his first plow to a farmer named Lewis Crandall. Lewis saw that the plow worked very well and told lots of other farmers. By 1841, John was making 100 of the plows every year. By 1848, John had moved the business to Moline, Illinois. Moline had water power, coal and cheaper transportation than in Grand Detour. In 1850, John’s company made 1600 plows. The company was soon producing other tools to go with the steel plow. 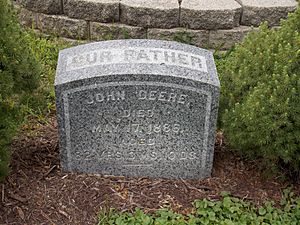 Later in life, Deere focused most of his attention on civil and political affairs. He served as President of the National Bank of Moline, a director of the Moline Free Public Library, and was a trustee of the First Congregational Church. Deere also served as Moline's mayor for two years but due to chest pains and dysentery Deere refused to run for a second term.

Deere retired in 1857, leaving the operation to his son. John stayed on as president of the company. In 1868, the company was formally incorporated as Deere & Company, today the leading manufacturer of agricultural machinery in the world. He died at home (known as Red Cliff) on May 17, 1886.

All content from Kiddle encyclopedia articles (including the article images and facts) can be freely used under Attribution-ShareAlike license, unless stated otherwise. Cite this article:
John Deere Facts for Kids. Kiddle Encyclopedia.