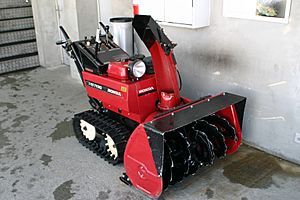 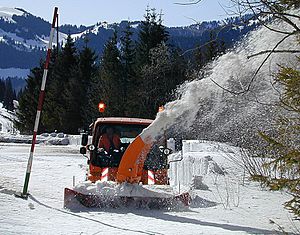 A snow blower at work in Upper Bavaria, Germany, 2005 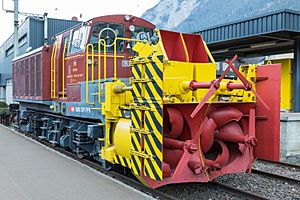 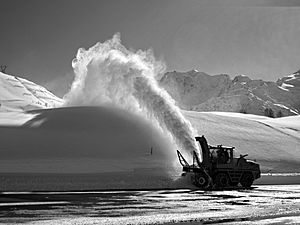 A snow blower or snow thrower is a machine for removing snow from an area where it is not wanted, such as a driveway, sidewalk, roadway, railroad track, ice rink, or runway.

The commonly used term "snow blower" is really the wrong name, as the snow is moved using an auger or impeller instead of being blown (by air).

It can use either electric power (line power or battery), or a gasoline or diesel engine to throw snow to another location or into a truck to be hauled away. This is in contrast with the action of snow plows, which push snow to the front or side. Typically, the snow is discharged to one side.

Depending on the design, snowblowers can be pressed into service blowing other things, such as water. 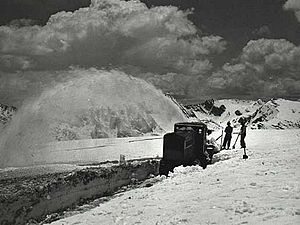 Robert Carr Harris of Maple Green, New Brunswick patented a "Railway Screw Snow Excavator" in 1870. In 1923, Robert E. Cole patented a snowplow that operated by using cutters and a fan to blow snow from a surface. Various other innovations also occurred. However, it is Arthur Sicard (1876–1946) who is generally credited as the inventor of the first practical snow blower. In 1925 Sicard completed his first prototype, based on a concept he described in 1894. He founded Sicard Industries in Sainte-Thérèse, Quebec and by 1927 his vehicles were in use removing snow from the roadways of the town of Outremont, now a borough of Montreal. His company is now a division of SMI-Snowblast, Inc. of Watertown, New York. 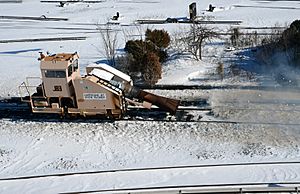 Jet engines and other gas turbines are used for large scale propelling and melting of snow over rails and roads. These blowers first were used in Russia and Canada in the 1960s, and were later introduced into the U.S. by the Boston Transportation Authority.

The jet engine both melts and blows the snow, clearing the tracks faster than other methods. While offering considerably greater power in a relatively lightweight machine, this method is much more expensive than traditional snow removing methods. In Russia, the high cost is partially negated by utilizing retired military jet engines, such as the Klimov VK-1.

All content from Kiddle encyclopedia articles (including the article images and facts) can be freely used under Attribution-ShareAlike license, unless stated otherwise. Cite this article:
Snow blower Facts for Kids. Kiddle Encyclopedia.