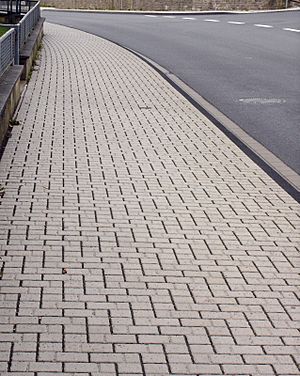 A sidewalk is a path for pedestrians that runs along the side of a road. It is called a sidewalk in American English, but can also be called a pavement (mainly British English), a footpath (Australian English, Irish English, Indian English and New Zealand English) or footway (Engineering term).

Pedestrians use sidewalks to keep them safe from vehicles on the road. Sidewalks can be made of bricks or from tarmac. 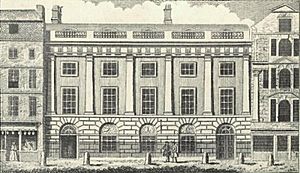 East India House, Leadenhall Street, London, 1766. The sidewalk is separated from the main street by six bollards in front of the building. 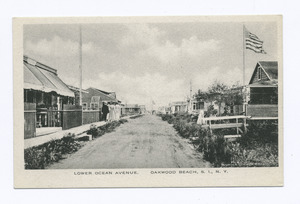 Sidewalks have operated for at least 4000 years. The Greek city of Corinth had sidewalks by the 4th-century BCE, and the Romans built sidewalks – they called them sēmitae.

However, by the Middle Ages, narrow roads had reverted to being simultaneously used by pedestrians and wagons without any formal separation between the two categories. Early attempts at ensuring the adequate maintenance of foot-ways or sidewalks were often made, as in the 1623 Act for Colchester, but they were generally not very effective.

Following the Great Fire of London in 1666, attempts were slowly made to bring some order to the sprawling city. In 1671, 'Certain Orders, Rules and Directions Touching the Paving and Cleansing The Streets, Lanes and Common Passages within the City of London' were formulated, calling for all streets to be adequately paved for pedestrians with cobblestones. Purbeck stone was widely used as a durable paving material. Bollards were also installed to protect pedestrians from the traffic in the middle of the road.

The British House of Commons passed a series of Paving Acts from the 18th century. The 1766 Paving & Lighting Act authorized the City of London Corporation to establish foot-ways throughout all the streets of London, to pave them with Purbeck stone (the thoroughfare in the middle was generally cobblestone) and to raise them above the street level with curbs forming the separation. The Corporation was also made responsible for the regular upkeep of the roads, including their cleaning and repair, for which they charged a tax from 1766. By the late 19th-century large and spacious sidewalks were routinely constructed in European capitals, and were associated with urban sophistication.

In the United States, adjoining property owners must in most situations finance all or part of the cost of sidewalk construction. In a legal case in 1917 involving E. L. Stewart, a former member of the Louisiana House of Representatives and a lawyer in Minden in Webster Parish, the Louisiana Supreme Court ruled that owners must pay whether they wish for the sidewalk to be constructed or not. 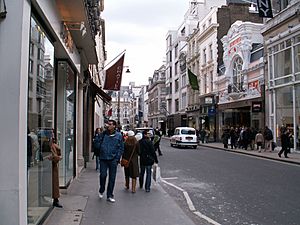 Pedestrians walking on the pavement (sidewalk) in London.

Sidewalks play an important role in transportation, as they provide a safe path for people to walk along that is separated from the motorized traffic. They aid road safety by minimizing interaction between pedestrians and motorized traffic. Sidewalks are normally in pairs, one on each side of the road, with the center section of the road for motorized vehicles.

In rural roads, sidewalks may not be present as the amount of traffic (pedestrian or motorized) may not be enough to justify separating the two. In suburban and urban areas, sidewalks are more common. In town and city centers (known as downtown in North America) the amount of pedestrian traffic can exceed motorized traffic, and in this case the sidewalks can occupy more than half of the width of the road, or the whole road can be reserved for pedestrians, see Pedestrian zone.

Sidewalks may have a small effect on reducing vehicle miles traveled and carbon dioxide emissions. A study of sidewalk and transit investments in Seattle neighborhoods found vehicle travel reductions of 6 to 8% and CO2 emission reductions of 1.3 to 2.2% 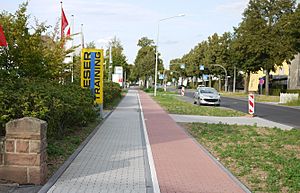 Research commissioned for the Florida Department of Transportation, published in 2005, found that, in Florida, the Crash Reduction Factor (used to estimate the expected reduction of crashes during a given period) resulting from the installation of sidewalks averaged 74%. Research at the University of North Carolina for the U.S. Department of Transportation found that the presence or absence of a sidewalk and the speed limit are significant factors in the likelihood of a vehicle/pedestrian crash. Sidewalk presence had a risk ratio of 0.118, which means that the likelihood of a crash on a road with a paved sidewalk was 88.2 percent lower than one without a sidewalk. “This should not be interpreted to mean that installing sidewalks would necessarily reduce the likelihood of pedestrian/motor vehicle crashes by 88.2 percent in all situations. However, the presence of a sidewalk clearly has a strong beneficial effect of reducing the risk of a ‘walking along roadway’ pedestrian/motor vehicle crash.” The study does not count crashes that happen when walking across a roadway. The speed limit risk ratio was 1.116, which means that a 16.1-km/h (10-mi/h) increase in the limit yields a factor of (1.116)10 or 3.

The presence or absence of sidewalks was one of three factors that were found to encourage drivers to choose lower, safer speeds.

On the other hand, the implementation of schemes which involve the removal of sidewalks, such as shared space schemes, are reported to deliver a dramatic drop in crashes and congestion too, which indicates that a number of other factors, such as the local speed environment, also play an important role in whether sidewalks are necessarily the best local solution for pedestrian safety.

In cold weather, black ice is a common problem with unsalted sidewalks. The ice forms a thin transparent surface film which is almost impossible to see, and so results in many slips by pedestrians.

Riding bicycles on sidewalks is discouraged since some research shows it to be more dangerous than riding in the street. Some jurisdictions prohibit sidewalk riding except for children. In addition to the risk of cyclist/pedestrian collisions, cyclists face increase risks from collisions with motor vehicles at street crossings and driveways. Riding in the direction opposite to traffic in the adjacent lane is especially risky.

Since residents of neighborhoods with sidewalks are more likely to walk, they tend to have lower rates of cardiovascular disease, obesity, and other health issues related to sedentary lifestyles. Also, children who walk to school have been shown to have better concentration. 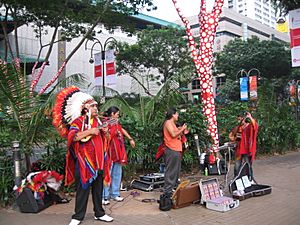 Some sidewalks may be used as social spaces with sidewalk cafes, markets, or busking musicians, as well as for parking for a variety of vehicles including cars, motorbikes and bicycles.

Contemporary sidewalks are most often made of concrete in North America, while tarmac, asphalt, brick, stone, slab and (increasingly) rubber are more common in Europe. Different materials are more or less friendly environmentally: pumice-based trass, for example, when used as an extender is less energy-intensive than Portland cement concrete or petroleum-based materials such as asphalt or tar-penetration macadam. Multi-use paths alongside roads are sometimes made of materials that are softer than concrete, such as asphalt.

In the 19th century and early 20th century, sidewalks of wood were common in some North American locations. They may still be found at historic beach locations and in conservation areas to protect the land beneath and around, called boardwalks.

Stone slabs called flagstones or flags are sometimes used where an attractive appearance is required, as in historic town centers. In other places, pre-cast concrete slabs (called paving slabs or, less correctly, paving stones) are used. These may be colored or textured to resemble stone. 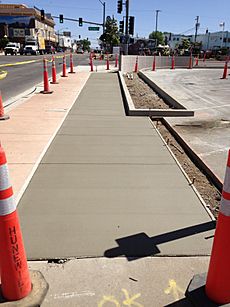 In the United States and Canada, the most common type of sidewalk consists of a poured concrete ribbon, examples of which from as early as the 1860s can be found in good repair in San Francisco, and stamped with the name of the contractor and date of installation. When quantities of Portland cement were first imported to the United States in the 1880s, its principal use was in the construction of sidewalks.

Today, most sidewalk ribbons are constructed with cross-lying strain-relief grooves placed or sawn at regular intervals typically 5 feet (1.5 m) apart. This partitioning, an improvement over the continuous slab, was patented in 1924 by Arthur Wesley Hall and William Alexander McVay, who wished to minimize damage to the concrete from the effects of tectonic and temperature fluctuations, both of which can crack longer segments. The technique is not perfect, as freeze-thaw cycles (in cold-weather regions) and tree root growth can eventually result in damage which requires repair.

All content from Kiddle encyclopedia articles (including the article images and facts) can be freely used under Attribution-ShareAlike license, unless stated otherwise. Cite this article:
Sidewalk Facts for Kids. Kiddle Encyclopedia.