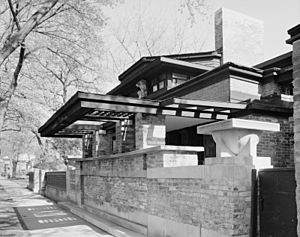 Oak Park, Illinois is a suburb of Chicago. It is west of the city in the same county. About 52,000 people live there.

Ernest Hemingway was born there. Betty White was born there too. Frank Lloyd Wright lived and worked there for a while. Some of his most famous houses and buildings were built there.

All content from Kiddle encyclopedia articles (including the article images and facts) can be freely used under Attribution-ShareAlike license, unless stated otherwise. Cite this article:
Oak Park, Illinois Facts for Kids. Kiddle Encyclopedia.