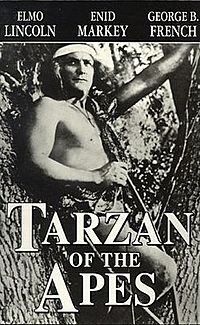 Tarzan is a main fictional character. He appeared in many books by Edgar Rice Burroughs. Burroughs first wrote about Tarzan in 1914. The book was called Tarzan of the Apes. Tarzan's father was an English lord who died in the African jungle. The baby Tarzan was left alone in the jungle. Giant apes found the baby Tarzan and took care of him. Tarzan has also appeared in other media including movies, movie serials, comic books, and television programs.

All content from Kiddle encyclopedia articles (including the article images and facts) can be freely used under Attribution-ShareAlike license, unless stated otherwise. Cite this article:
Tarzan Facts for Kids. Kiddle Encyclopedia.