Johnny Weissmuller (2 June 1904 – 20 January 1984) was an Austro-Hungarian-born American competition swimmer and actor, best known for playing Edgar Rice Burroughs's ape man Tarzan in films of the 1930s and 1940s and for having one of the best competitive swimming records of the 20th century.

At age nine, young John Weissmüller contracted polio. At the suggestion of his doctor, he took up swimming to help battle the disease. After the family moved from western Pennsylvania to Chicago, he continued swimming and eventually earned a spot on the YMCA swim team.

Weissmuller became one of the world's fastest swimmers in the 1920s, winning five Olympic gold medals for swimming and one bronze medal for water polo. He was the first to break the one minute barrier for 100-meter freestyle, and the first to swim 440-yard freestyle under five minutes. He won fifty-two U.S. national championships, set more than 50 world records (spread over both freestyle and backstroke), and was undefeated in official competition for the entirety of his competitive career.

After retiring from competitions, he became the sixth actor to portray Tarzan, a role he played in twelve feature films. Dozens of other actors have also played Tarzan, but Weissmuller is by far the best known. Weissmuller's distinctive Tarzan yell is still often used in films in his legacy. 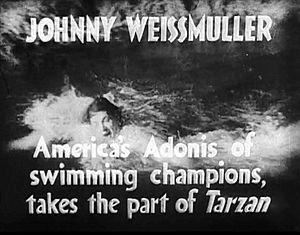 Tarzan the Ape Man (1932) with Johnny Weissmuller as Tarzan

In 1929, Weissmuller signed a contract with BVD to be a model and representative. He traveled throughout the country doing swim shows, handing out leaflets promoting that brand of swimwear, signing autographs and going on radio. In that same year, he made his first motion picture appearance as an Adonis, wearing only a fig leaf, in a movie entitled Glorifying the American Girl.

He appeared as himself in the first of several Crystal Champions movie shorts featuring Weissmuller and other Olympic champions at Silver Springs, Florida. He co-starred with Esther Williams in Billy Rose's Aquacade during the New York World's Fair 1939–41. 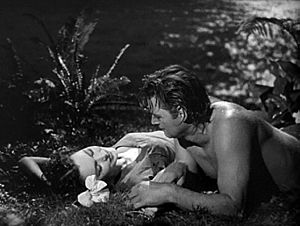 His acting career began when he signed a seven-year contract with Metro-Goldwyn-Mayer and played the role of Tarzan in Tarzan the Ape Man (1932). The movie was a huge success and Weissmuller became an overnight international sensation. The author of Tarzan, Edgar Rice Burroughs, was pleased with Weissmuller. 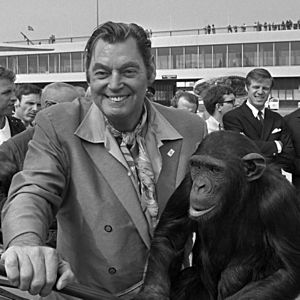 According to the book by Weissmuller's son Tarzan, My Father, while playing golf in Cuba in 1958 during the Cuban Revolution, Weissmuller's golf cart was suddenly surrounded by rebel soldiers. Weissmuller was unable to communicate who he was until he got out of the cart and attempted the trademark Tarzan yell. The soldiers then recognized him and shouted '"¡Es Tarzán! ¡Es Tarzán de la Jungla!" Johnny and his companions were not only not kidnapped, but the guerillas gave him an escort to his hotel.

Weissmuller was an accomplished amateur golfer and played in two official PGA Tour tournaments, at the 1937 Western Open at Canterbury Golf Club outside Cleveland and the 1948 Hawaiian Open, to finish in 37th place.

In the late 1950s, Weissmuller moved back to Chicago and started a swimming pool company. He lent his name to other business ventures, but did not have a great deal of success. He retired in 1965 and moved to Fort Lauderdale, Florida, where he was Founding Chairman of the International Swimming Hall of Fame (ISHOF). He was inducted into the ISHOF the same year.

In September 1966, Weissmuller joined former screen Tarzans James Pierce and Jock Mahoney to appear with Ron Ely as part of the publicity for the upcoming premiere of the Tarzan TV series. In the late 60s and early 70s, Weissmuller was involved with a tourist attraction called Tropical/Florida Wonderland, a.k.a. Tarzan's Jungleland, on US 1 in Titusville, Florida. 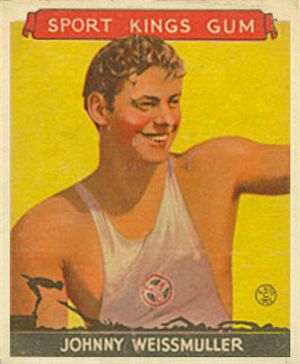 Based on his interest in natural lifestyles, Weissmuller opened a small chain of health food stores called Johnny Weissmuller's American Natural Foods in California in 1969.

In 1970, he attended the British Commonwealth Games in Edinburgh, where he was presented to Queen Elizabeth II. That same year, he appeared with former co-star Maureen O'Sullivan in The Phynx (1970).

Weissmuller lived in Florida until the end of 1973, then moved to Las Vegas, Nevada, where he worked as a greeter at Caesars Palace along with boxer Joe Louis for a time. In 1976, he appeared for the last time in a motion picture in Won Ton Ton, the Dog Who Saved Hollywood, and he also made his final public appearance in that year when he was inducted into the Body Building Guild Hall of Fame. 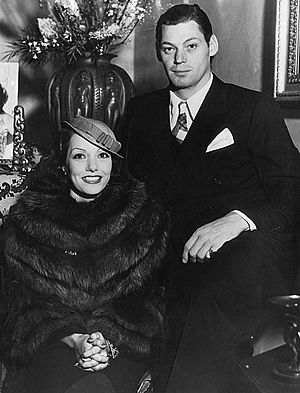 With his second wife, the Mexican actress Lupe Vélez in a newspaper press photo (1934) 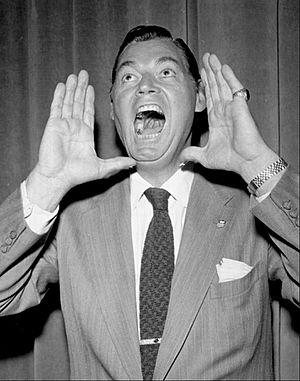 Johnny Weissmuller doing his Tarzan yell for the camera 1958

In 1974, Weissmuller broke both his hip and leg, marking the beginning of years of declining health. While hospitalized he learned that in spite of his strength and lifelong daily regimen of swimming and exercise, he had a serious heart condition. In 1977, Weissmuller suffered a series of strokes. In 1979, he entered the Motion Picture & Television Country House and Hospital in Woodland Hills, California for several weeks before moving with his last wife, Maria, to Acapulco, Mexico, the location of his last Tarzan movie.

On January 20, 1984, Weissmuller died from pulmonary edema at the age of 79. He was buried just outside Acapulco, Valle de La Luz at the Valley of the Light Cemetery. As his coffin was lowered into the ground, a recording of the Tarzan yell he invented was played three times, at his request. He was honored with a 21-gun salute, befitting a head-of-state, which was arranged by Senator Ted Kennedy and President Ronald Reagan.

All content from Kiddle encyclopedia articles (including the article images and facts) can be freely used under Attribution-ShareAlike license, unless stated otherwise. Cite this article:
Johnny Weissmuller Facts for Kids. Kiddle Encyclopedia.