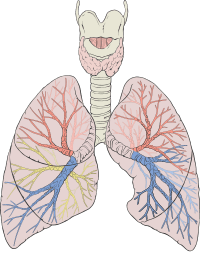 Pulmonary edema (pulmonary oedema in British English) is fluid in the lungs ("Pulmonary" means "lungs"; "edema" means "swelling" or "fluid"). Normally, the lungs fill with air when a person breathes in. From the alveoli in the lungs, oxygen goes into the blood. The blood then carries oxygen to the entire body. Every part of the body needs oxygen to survive.

When a person has fluid in their lungs (pulmonary edema), there is not enough space left for air to get into the lungs. The person will not be able to breathe in as much air. This means not as much oxygen will get into the blood, and the body will not get the oxygen it needs.

Other, non-cardiogenic causes of pulmonary edema include:

Symptoms of pulmonary edema may include:

No matter what the cause is, pulmonary edema can be treated by:

Other treatments can focus on the cause of the pulmonary edema. For example, if a person with kidney failure has had too much salt or fluid, they can have dialysis to take away the extra fluid and salt.

All content from Kiddle encyclopedia articles (including the article images and facts) can be freely used under Attribution-ShareAlike license, unless stated otherwise. Cite this article:
Pulmonary edema Facts for Kids. Kiddle Encyclopedia.