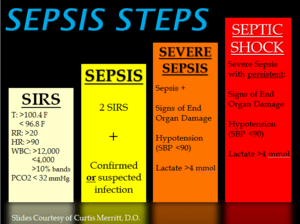 Sepsis is a very dangerous disease. It occurs when an infection goes wrong. Normally the immune system of the body is able to fight the germs and overcome the infection, but in the sepsis something goes wrong. The pathogen was at some point able to get into the blood or tissues. The term sepsis is frequently used to refer to septicemia (blood poisoning). Septicemia is only one type of sepsis. Bacteremia specifically refers to the presence of bacteria in the bloodstream (viremia and fungemia are the terms used for viruses and fungi). A sepis is a medical emergency, as it can put the life in danger, if it is not acted on.

Common symptoms of sepsis are inflammations all over the body. This is often combined with high fever. Today, people believe, these symptoms are caused by the immune system trying to fight the disease. Because of the strong reactions, organs can be damaged in the process. In a sense, the immune system over-reacts the germs and goes awry, causing damage to the organs.

In the United States, sepsis is the leading cause of death for ICU patients which do not have heart problems. Data from the Centers for Disease Control and Prevention shows it is the tenth most common cause of death overall. Older people, those with a weak immune system and those with a strong illness suffer from sepis more often. It is also more dangerous to them. It occurs in 1%-2% of all hospitalizations and accounts for as much as 25% of intensive care unit (ICU) bed utilization. It is a major cause of death in intensive care units worldwide, with mortality rates that range from 20% for sepsis to 40% for severe sepsis to over 60% for septic shock.

Severe sepsis and septic shock are more severe forms of sepsis. With severe sepsis, one or more organs fail to work. Septic shock is when sepsis is combined with very low blood pressure.

Today, the bacterial forms of sepsis can be treated with antibiotics. In addition, the fluids (blood) containing the germs have to be replaced. It might also necessary to functionally replace the organs that failed. It is important to begin to treat the sepsis as quickly as possible, as each hour left untreated will raise the chances of death by 5% to 10% each hour.

About half the people affected and untreated die from the condition. Rapid access to treatment will increase the chances of survival, in most cases.

All content from Kiddle encyclopedia articles (including the article images and facts) can be freely used under Attribution-ShareAlike license, unless stated otherwise. Cite this article:
Sepsis Facts for Kids. Kiddle Encyclopedia.