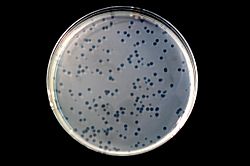 Bacteria growing on an agar plate

Antibiotic resistance tests: Bacteria are streaked on the dish on which antibiotic impregnated white disks are placed. Bacteria in the culture on the left are susceptible to the antibiotic in each disk, as shown by the dark, clear rings where bacteria have not grown. Those on the right are fully susceptible to only three of the seven antibiotics tested.
Not to be confused with antibody.

An antibiotic (or antibacterial) is something that kills bacteria or slows the growth of bacteria. They are used as medicines to cure diseases caused by bacteria. Antibiotics are no use against viruses. Penicillin, the first natural antibiotic, is produced by a fungus. Production started in 1939, and now it is made by chemical synthesis.

Today, people worry that bacteria will not be affected by antibiotics. Bacteria do evolve, and already many strains of bacteria resist regular antibiotics. When exposed to antibiotics, most bacteria die quickly, but some may have mutations which make them slightly less susceptible. These bacteria then multiply and make a large colony which is less affected by the antibiotic.

Part of this problem is caused by the over-use and misuse of antibiotics. If someone is sick with a virus, antibiotics will not affect the virus. Some doctors will still prescribe an antibiotic so the patient feels as though they are being treated for their illness.

The other problem is that many people do not use antibiotics correctly. People often stop taking the medicine when they start feeling better. But antibiotics don't kill all of the bad bacteria at once. Bacteria which are more resistant do not die right away. When someone stops taking the antibiotic too quickly, these resistant bacteria can reproduce and survive. Then the antibiotic does not work so well because the bacteria are less affected by it.

Penicillin, the first natural antibiotic discovered by Alexander Fleming in 1928.

The term antibiotic was first used in 1942 by Selman Waksman and his collaborators in journal articles to describe any substance produced by a microorganism that is antagonistic to the growth of other microorganisms in high dilution. This definition cut out substances which kill bacteria, but are not produced by microorganisms (such as gastric juices and hydrogen peroxide). It also excluded synthetic antibacterial compounds such as the sulfonamides.

With advances in medicinal chemistry, most of today's antibacterials chemically are modifications of various natural compounds.

Certain bacteria are only affected by specific types of antibiotics. Patients might need different types or different amounts of antibiotics depending on what bacteria is causing their health problems. Because of this, antibiotics should always be used under the supervision of a medical doctor (or other certified medical practitioner). The doctor can also watch for side effects and change the patient's treatment when necessary. Antibiotics are very useful when your body is infected by a bacteria. Antibiotics don't kill virus, so it is useless against a viral infection. A doctor must determine if a patient's infection is of viral or bacterial origin before taking antibiotics, this is another reason why a medical doctor should prescribe antibiotics instead of relying on self-medication.

The first new antibiotic in forty years has been discovered. It is called teixobactin, and researchers say it is very promising. It has not yet been developed and tested, so it will be some time before it is in doctors' hands. It only works on gram-positive bacteria. However, that does include MRSA and Mycobacterium tuberculosis.

All content from Kiddle encyclopedia articles (including the article images and facts) can be freely used under Attribution-ShareAlike license, unless stated otherwise. Cite this article:
Antibiotics Facts for Kids. Kiddle Encyclopedia.