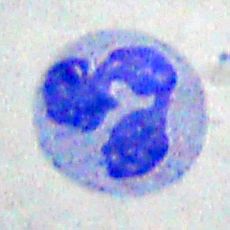 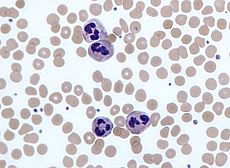 Neutrophils among the red blood corpuscles

Neutrophils are the most common type of white blood cell, often called neutrophil granulocytes. They destroy bacteria (and other parasites like fungi) during an infection. They get to the site of an injury within minutes. They have tiny granules full of enzymes and peptides which chop up the bacteria after they have taken them in.

The process of taking in bacteria is called phagocytosis. The bacteria end up in a vacuole inside the neutrophil. The enzymes then get to work on the bacteria. Neutrophils are an important part of the body's immune system. They are a kind of granulocyte, and have a short life-span of a couple of days.

All content from Kiddle encyclopedia articles (including the article images and facts) can be freely used under Attribution-ShareAlike license, unless stated otherwise. Cite this article:
Neutrophil Facts for Kids. Kiddle Encyclopedia.