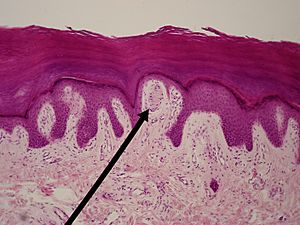 100x light micrograph of Meissner's corpuscle at the tip of a dermal papillus. 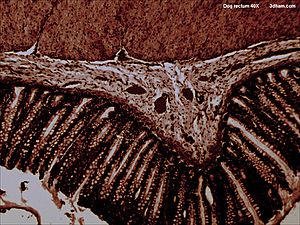 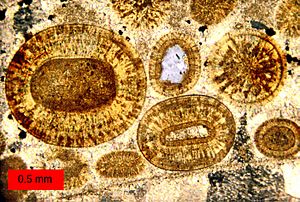 A photomicrograph of a thin section of a limestone with ooids. The largest is approximately 1.2 mm in diameter. The red object in the lower left is a scale bar indicating relative size.

Approximately 10x micrograph of a doubled die on a coin, where the date was struck twice.

A micrograph contains extensive details of microstructure. A wealth of information can be obtained from a simple micrograph like behavior of the material under different conditions, the phases found in the system, failure analysis, grain size estimation, elemental analysis and so on. Micrographs are widely used in all fields of microscopy.

Scientific use began in England in 1850 by Prof Richard Hill Norris FRSE for his studies of blood cells.

Photomicrographs may also be obtained using a USB microscope attached directly to a home computer or laptop.

Micrographs usually have micron bars, or magnification ratios, or both.

Magnification is a ratio between the size of an object on a picture and its real size. Unfortunately, magnification can be a misleading parameter as it depends on the final size of a printed picture and therefore varies with picture size. A scale bar, or micron bar, is a line of known length displayed on a picture. The bar can be used for measurements on a picture. When the picture is resized the bar is also resized making it possible to recalculate the magnification. Ideally, all pictures destined for publication/presentation should be supplied with a scale bar; the magnification ratio is optional. All but one (limestone) of the micrographs presented on this page do not have a micron bar; supplied magnification ratios are likely incorrect, as they were not calculated for pictures at the present size.

The microscope has been mainly used for scientific discovery. It has also been linked to the arts since its invention in the 17th century. Early adopters of the microscope, such as Robert Hooke and Antonie van Leeuwenhoek, were excellent illustrators. After the invention of photography in the 1820s the microscope was later combined with the camera to take pictures instead of relying on an artistic rendering.

Since the early 1970s individuals have been using the microscope as an artistic instrument. Websites and traveling art exhibits such as the Nikon Small World and Olympus Bioscapes have featured a range of images for the sole purpose of artistic enjoyment. Some collaborative groups, such as the Paper Project have also incorporated microscopic imagery into tactile art pieces as well as 3D immersive rooms and dance performances.

All content from Kiddle encyclopedia articles (including the article images and facts) can be freely used under Attribution-ShareAlike license, unless stated otherwise. Cite this article:
Micrograph Facts for Kids. Kiddle Encyclopedia.