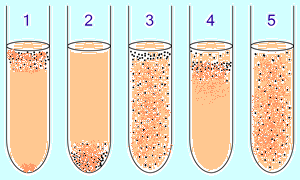 Thioglycolate broth is a medium used mainly to find out the oxygen requirements of microorganisms.
1: Obligate aerobes need oxygen. They gather at the top of the tube where its concentration is highest.
2: Obligate anaerobes are poisoned by oxygen, so they gather at the bottom of the tube where the oxygen concentration is lowest.
3: Facultative anaerobes can grow anywhere in tube, but they gather mostly at the top because they have more energy with oxygen.
4: Microaerophiles need oxygen: they cannot ferment or respire anaerobically. However, they are poisoned by high concentrations of oxygen. They gather in the upper part of the test tube but not the very top.
5: Aerotolerant organisms do not need oxygen as they metabolise energy anaerobically. But, unlike obligate anaerobes, they are not poisoned by oxygen. They are found evenly spread throughout the test tube

An anaerobic organism is any living thing that does not need oxygen for growth.

Some anaerobic bacteria produce toxins (e.g., tetanus or botulinum toxins) that are highly dangerous to higher organisms, including humans.

All content from Kiddle encyclopedia articles (including the article images and facts) can be freely used under Attribution-ShareAlike license, unless stated otherwise. Cite this article:
Anaerobic organism Facts for Kids. Kiddle Encyclopedia.