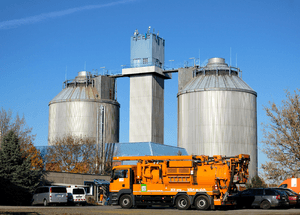 Anaerobic digestion occurs naturally in some soils and in lake and oceanic basin sediments, where it is usually referred to as "anaerobic activity". This is the source of marsh gas methane as discovered by Alessandro Volta in 1776.

Anaerobic digesters can also be fed with purpose-grown energy crops, such as maize.

Anaerobic digestion is widely used as a source of renewable energy. The process produces a biogas, consisting of methane, carbon dioxide, and traces of other ‘contaminant’ gases. This biogas can be used directly as fuel, in combined heat and power gas engines or upgraded to natural gas-quality biomethane. The nutrient-rich digestate also produced can be used as fertilizer.

Using anaerobic digestion technologies can help to reduce the emission of greenhouse gasses in a number of key ways: 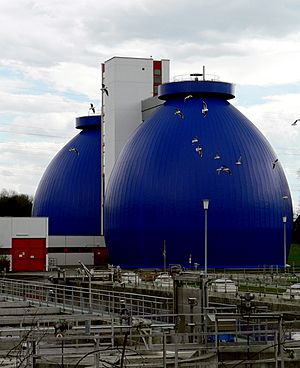 With the re-use of waste as a resource and new technological approaches that have lowered capital costs, anaerobic digestion has in recent years received increased attention among governments in a number of countries, among these the United Kingdom (2011), Germany, Denmark (2011), and the United States.

All content from Kiddle encyclopedia articles (including the article images and facts) can be freely used under Attribution-ShareAlike license, unless stated otherwise. Cite this article:
Anaerobic digestion Facts for Kids. Kiddle Encyclopedia.