Usually, this process uses oxygen, and is called aerobic respiration. It has four stages known as glycolysis, Link reaction, the Krebs cycle, and the electron transport chain. This produces ATP which supplies the energy that cells need to do work.

When they don't get enough oxygen, the cells use anaerobic respiration, doesn’t require oxygen. However, this process produces lactic acid, and is not as efficient as when oxygen is used.

Aerobic respiration, the process that does use oxygen, produces much more energy and doesn’t produce lactic acid. It also produces carbon dioxide as a waste product, which then enters the circulatory system. The carbon dioxide is taken to the lungs, where it is exchanged for oxygen.

The simplified formula for aerobic cellular respiration is:

The word equation for this is: 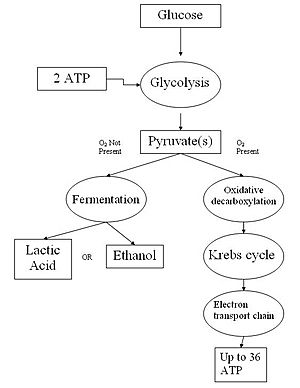 In glycolysis, glucose in the cytoplasm is broken into two molecules of pyruvate. Ten enzymes are needed for the ten intermediate compounds in this process.

Productivity of the cycle

Biology textbooks often state that 38 ATP molecules can be made per oxidised glucose molecule during cellular respiration (two from glycolysis, two from the Krebs cycle, and about 34 from the electron transport chain). However, the process actually makes less energy (ATP) because of losses through leaky membranes. Estimates are 29 to 30 ATP per glucose.

Pyruvate from glycolysis is actively pumped into mitochondria. One carbon dioxide molecule and one hydrogen molecule are removed from the pyruvate (called oxidative decarboxylation) to produce an acetyl group, which joins to an enzyme called CoA to form acetyl CoA. This is essential for the Krebs cycle.

Acetyl CoA joins with oxaloacetate to form a compound with six carbon atoms. This is the first step in the ever-repeating Krebs cycle. Because two acetyl-CoA molecules are produced from each glucose molecule, two cycles are required per glucose molecule. Therefore, at the end of two cycles, the products are: two ATP, six NADH, two FADH, and four CO2. The ATP is a molecule which carries energy in chemical form to be used in other cell processes. This process is also known as the TCA cycle (Tricarboxylic (try-car-box-ILL-ick) acid cycle), the citric acid cycle, or the Krebs cycle after the biochemist who elucidated its reactions.

All content from Kiddle encyclopedia articles (including the article images and facts) can be freely used under Attribution-ShareAlike license, unless stated otherwise. Cite this article:
Cellular respiration Facts for Kids. Kiddle Encyclopedia.