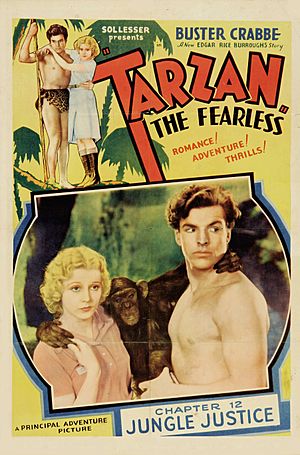 Tarzan was a movie serial hero.

A movie serial is a movie broken into a several segments called "chapters" or "episodes". The segments are short. In the past, movie serials were originally shown in theaters with cartoons, newreels, and two movies. Each chapter was shown at the same theater for one week. A chapter ended with a cliffhanger, in which the hero or heroine was left in a dangerous situation. Viewers had to return each week to see the cliffhanger resolved and to follow the continuing story. Movie serials were popular with children. Heroes included Flash Gordon, Buck Rogers, Tarzan, Dick Tracy, and others.

All content from Kiddle encyclopedia articles (including the article images and facts) can be freely used under Attribution-ShareAlike license, unless stated otherwise. Cite this article:
Movie serial Facts for Kids. Kiddle Encyclopedia.