Berwyn is a suburban city in Cook County, Illinois, coterminous with Berwyn Township, which was formed in 1908 after breaking off from Cicero Township. As of the 2010 census, the city had a total population of 56,657.

The land that today makes up Berwyn was originally fairly marshy and cold. As the glaciers receded at the end of the last ice age, a giant body of water known as Ancient Lake Chicago was created. Over time, Lake Chicago grew smaller and became Lake Michigan, and the stream that connected the lake to the Illinois River became a swamp known as Mud Lake. Mud Lake extended nearly to the southern border of today's Berwyn.

In 1846, the first land in "Berwyn" was deeded to Theodore Doty who built the 8-foot-wide (2.4 m) Plank Road from Chicago to Ottawa. This thoroughfare became what is now Ogden Avenue in South Berwyn. In 1856, Thomas F. Baldwin purchased 347 acres (1.40 km2) of land, bordered by what is now Ogden Avenue, Ridgeland Avenue, 31st Street, and Harlem Avenue, in hopes of developing a rich and aristocratic community called "LaVergne". However, few people were interested in grassy marshland. Mud Lake extended nearly to the southern border of today's Berwyn, and the land flooded regularly during heavy rains. The only mode of transportation to LaVergne was horse and buggy on the Plank Road.

To encourage people to move to LaVergne, Baldwin sold an 80-foot-wide (24 m) strip of property to the Burlington and Quincy Railroad in 1862. The rail line opened in 1864, but the train did not stop regularly in the area. The railroad refused to build a station, so the residents of the area constructed LaVergne Station on Ridgeland Avenue in 1874.

However, the financial panic of 1873 and Baldwin's death in 1876 stunted the growth of LaVergne. Baldwin's daughter, Emma, inherited her father's estate, and in 1879 she sold most of the land to a group of realtors controlled by Marshall Field. The new development enacted building codes and stipulated the minimum building cost of each home. By the end of 1880, 12 new homes were built. By 1888, the settlement had grown so much that the Baldwin family donated the triangular piece of land bounded by Ogden Avenue, 34th Street, and Gunderson Avenue so that a school could be built. LaVergne School became the first public building in Berwyn.

In 1890, Charles E. Piper and Wilbur J. Andrews, two Chicago attorneys, purchased a 106-acre (0.43 km2) plot of land from the Field syndicate to develop. The land was bounded by Wesley, Kenilworth, 31st Street, and Ogden Avenues. By the following year, the two received approval from Cicero Township to double their land holdings.

Piper and Andrews wanted the railroad to build a station in their development, but the railroad already had stations at La Vergne and at Harlem Avenue. Piper and Andrews decided to build a station with the understanding that trains would stop regularly. They did not know what to name their station so they consulted a Pennsylvania train timetable to find a name. The name they chose was Berwyn, a beautiful subdivision outside of Philadelphia. After 1901, all settlements in the area were known as Berwyn.

While Piper and Andrews were developing the southern portion of present-day Berwyn, John Kelly was helping to develop the north part from 12th Street to 16th Street. This area was really a part of an Oak Park subdivision, and it even appeared on some maps as "South Oak Park". In fact, children who lived in this area went to school in Oak Park. John Kelly was known as "Mr. Everything" because he was a realtor, builder, insurance seller, and community servant.

In between the two settlements, there was little except for a few farms. The area between 16th and 31st streets was not settled. There were only two paths by which to travel between the two settlements, and today these paths are known as Oak Park Avenue and Ridgeland Avenue. Although Berwyn was chartered as a city in 1908, it was not until the 1920s that this middle portion of land was developed.

During this time, Berwyn was the area's fastest growing suburb. The city's stringent building codes resulted in block upon block of well-built brick two-story bungalows. Many also contained elaborate design elements typically not seen, such as stained glass windows, clay tile roofs, terra cotta, and intricate brick patterns. Today, Berwyn is noted as having the most significant collection of Chicago-style bungalows in the nation.

Berwyn was notable for the sculpture Spindle, created by artist Dustin Shuler and located in the Cermak Plaza shopping center along with other works of art. The Spindle was shown in the movie Wayne's World. It was demolished and scrapped on the night of May 2, 2008, to make way for a new Walgreens. Grassroots efforts to Save the Spindle failed to raise the $300,000+ that it would have taken to dismantle and relocate it, which was a major upset amongst supporters considering the sculpture did not encroach upon the new Walgreens final location. The two topmost cars were placed in storage; as of 2012[update] the Berwyn Route 66 Museum on Ogden Avenue proposes to incorporate them into a reconstruction of the Spindle.

Portions of the 2008 film Wanted with Angelina Jolie were also filmed in Cermak Plaza. Portions of the films A League of Their Own and Adventures in Babysitting were filmed at FitzGerald's Nightclub in Berwyn. It is also mentioned frequently on the television show Svengoolie.

Berwyn has one of the world's largest laundromats, 13,500 square feet (1,250 m2) in size, with 161 washers and 140 dryers, a kids' play area, big screen TVs, a bird sanctuary, and free pizza on Wednesday nights. It incurred extensive damage from an electrical fire in 2004 but was rebuilt in early 2006. This laundromat received considerable recognition for using a solar thermal system (the largest such installation in Illinois) to meet its hot water needs.

Berwyn now has a growing arts community with a professional equity theater, an Arts Council and top notch music and entertainment venues. The area has become a haven for artists, who enjoy a vibrant and affordable alternative to Chicago.

Berwyn is a very diverse community, with many larger homes on its south side and many smaller, bungalow-type homes on the north side around Roosevelt Road and Cermak Road.

For a period, Cermak Road earned the nickname "The Bohemian Wall Street" due to the large number of savings and loans located there. In 1991, the Chicago Sun-Times reported that "Berwyn has the highest concentration of financial institutions in the world - a tribute to the frugality of its forebears." The savings and loan crisis of the 1980s hit the area especially hard.

Just off East Avenue is Janura Park, with three baseball/softball diamonds and a hockey/basketball arena.

In 1987, a large new YMCA opened at 2947 Oak Park Ave. The building had an Olympic sized pool, racquet, handball court, a gym, and exercise facilities; including a rehabilitation centre operated with the MacNeal Memorial Hospital. 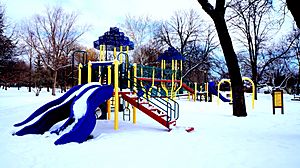 Proksa Park in the winter

Proksa Park comprises approximately 15 acres (61,000 m2) and is located between 29th and 31st streets. It contains numerous flower beds, 64 species of trees, 85 species of shrubs, as well as a small pond and stream. Recreational facilities include three tennis courts, two softball fields, and a large playground.

Another notable park, Baseball Alley, is right off East Avenue and 29th street stretching all the way to Ridgeland just next to Berwyn's Freedom Middle School. Baseball Alley is home to one of the more popular baseball teams in the neighborhood, Team Dynasty.

The Berwyn Eagles Club is a small venue that plays host as a Bingo Hall as well as an arena for monthly professional wrestling events held by All American Wrestling which is consider to be one of the top independent pro wrestling companies in the Midwest.

Horror host Rich Koz, aka Svengoolie, regularly comments on "beautiful Berwyn" as a long-running gag on his Chicago TV show.

From the 1920s to the 1970s, Berwyn had a large CzechoSlovakian population, and to celebrate their heritage the Houby Day Parade was organized in 1968 and continues to today. It coincides with the fall mushroom harvest.

In the 1960s and 1970s, many Italian families moved into Berwyn. The Maria SS Lauretana Italian-Sicilian Religious Festival is still held near the Morton West High School grounds during Labor Day weekend.

Ogden Avenue is part of the "Historic Route 66" in Berwyn, and an annual Vintage Car Show that's been taking place in early September since 1990. Ogden Avenue is closed to traffic from Ridgeland to Oak Park Avenue, and hundreds of car enthusiasts come out to celebrate the spirit of Route 66. In 2006, Berwyn has begun to host its annual art car parade called Cartopia. Art car artists from all over the country meet to show off their latest creations, and then a parade through the neighborhood.

All content from Kiddle encyclopedia articles (including the article images and facts) can be freely used under Attribution-ShareAlike license, unless stated otherwise. Cite this article:
Berwyn, Illinois Facts for Kids. Kiddle Encyclopedia.