U.S. Route 66 (also known as Route 66, U.S. Highway 66, The Main Street of America, The Mother Road and the Will Rogers Highway) was a highway in the U.S. Highway System. One of the original U.S. highways, Route 66 was established on November 11, 1926. However, road signs did not go up until the following year. The famous highway originally ran from Chicago, Illinois, through the U.S. states of Missouri, Kansas, Oklahoma, Texas, New Mexico, Arizona, and California, before ending at Los Angeles, running a total of 2,448 miles (3,940 km). It was replaced by freeways starting in the 1950s and stopped being a highway in 1985. 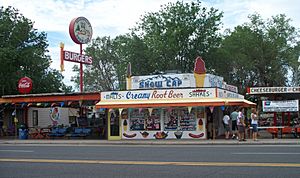 All content from Kiddle encyclopedia articles (including the article images and facts) can be freely used under Attribution-ShareAlike license, unless stated otherwise. Cite this article:
U.S. Route 66 Facts for Kids. Kiddle Encyclopedia.